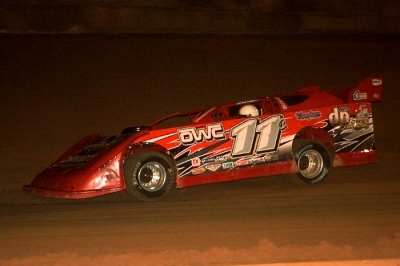 BAKER, La. (July 30) — Jeff Chanler of Minden, La., won Saturday at Baton Rouge Raceway to give him back-to-back O'Reilly Southern United Professional Racing events for the first time in his career. Chanler led flag-to-flag for a $2,500 payday and a four-second victory over Kevin Sitton of Baytown, Texas. | Slideshow

The only chance any driver had of getting close to Chanler during the 50-feature was on a restart and even then, Chanler mastered each of the four in taking the checkered flag just as he did the previous weekend at I-30 Speedway near Little Rock, Ark.

"I know winning last weekend gave us some much confidence and it only helped when I got down here and was then out front again," said Chanler, who avoided possible problems with slower cars at Baton Rouge. "There was two right in front of me where I went to the white flag, they were sliding around and I knew they would get too slideways and come into me."

Chanler took the lead from the outset over Starnes, Prince, Sitton and Kennith Crowe before a lap-two caution.

The feature limped along slowly for four more laps before seeing two straight yellows at lap six. The most serious caution came when contact between series founder Donald Watson and Robbie Stuart of Deridder, La., sent Stuart for a nasty ride into the backstretch wall near turn three. Stuart was uninjured but retired.

Another strong restart by Chanler had him at point again with Starnes, Sitton and Culp giving chase. Chanler's pace had him negotiating lap traffic on the 13th circuit.

Chanler built a two-second lead, but Starnes was able to find a way to cut into his advantage momentarily approaching the halfway point. Culp took a look under the third-running Sitton on lap 27.

The feature's final caution waved one lap later for the slowed car of Kevin Watts, setting up a 22-lap dash to the finish.

With Starnes shuffled back to fourth on the final restart, the real battle the rest of the way was between Sitton and Culp. The pair fought tooth-and-nail for second and Sitton never had an advantage of more than a few lengths on Culp.

Chanler cemented his lead with five laps remaining by putting a cushion of two lapped cars between his car and the second-running Sitton, and cruised the rest of the way.

Notes: Chanler's Barry Wright Race Car is powered by a PTS Racing Engine and sponsored by David Peterson Contracting, All Star Performance, David's Transmission, OWC Welding, AD Signs, CV Products, Weld Racing and Hoosier Racing Tires. ... Chanler's victory elevated him two spots in series points to fifth. ... The win was Chanler's ninth of his series career, tying him for 17th overall with Marlon Wild and Mike Boland. ... The checkered flags flew on the 30-minute feature at 11:46 p.m.. ... Nine cars finished on the lead lap with 14 cars running at the finish. ... Robbie Starnes was in an '05 Rocket Chassis formerly owned by Kevin Sitton, his second start in the car. The team had been fighting engine problems. ... Chris Holley of Dayton, Texas, broke an engine in the first heat and scratched from the feature. .... Marlon Wild also scratched with motor problems after hot laps. ... Alex Ashley of nearby Zachary, La., was behind the wheel of a Howard Jenkins-owned, MasterSbilt Crate Late Model, finishing 11th. The 20-year-old Ashley, who finished second in rookie points last season, has Crate division victories this season at Baton Rouge and Hattiesburg (Miss.) Motorsports Park. ... Another Crate Late Model driver, Shane Barbara of Ponchatoula, La., competed in the series for the first time, finishing 20th after bending a spindle. ... Shawn O'Toole of Pineville, La., debuted a black-skinned No. 02 race car and finished 18th. ... SUPR drivers return to action Aug. 6 at 171 Speedway in Leesville, La.