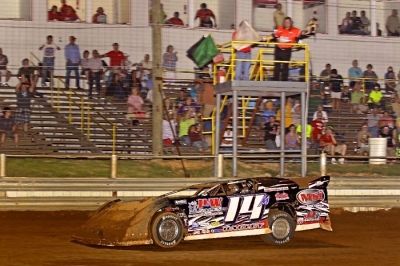 Morgan Bagley takes the checkers in leading his only lap. (Woody Hampton)

The 15th-starting Bagley made a high-side pass of polesitter and race-long leader Curtis Cook of Conway, Ark., on the final lap for the 35-lap victory, Bagley's fifth of the season in the track's five Late Model events. Bagley charged into turns one and two on the high side, powering around Cook to complete the pass down the backstretch.

"We started way back there in the feature, we had a good car and could pass wherever I wanted to, but I knew it was going to be hard to get up front," said Bagley, who avoided an early accident and moved into the runner-up spot when second-running Trey Beene dropped out with engine woes on lap 26.

"Whenever Beene pulled off, I told myself, ' Looks like we have a little chance and we can try something.' I seen the five (laps) to go, ran about two laps and cleared some lap traffic with some open racetrack ahead. I knew I could try the top for about two laps and find me something that worked. Maybe it would work or maybe it wouldn't, but we came from so far back that I wanted to go ahead and try to win it."

Cook, who led 34 of 35 laps in looking for his second series victory, thought he was in the winning groove.

"I thought if I could maintain that bottom, that I had this in the bag," Cook said. "I thought I heard somebody out there, so I was cutting down and getting a good drive off. I was sliding up there and cutting that line off. I rolled in there, hit that bottom and it was some slime down there, it got that nose to push and it let (Bagley) pull out there. I couldn't really believe it, it was kind of disheartening a little bit."

Bill Frye of Greenbrier, Ark. finished third while Brandon Smith of Flora, Ark., came from his 11th starting spot to finish fourth and fellow sixth-row starter B.J. Robinson of Blanchard, La., rounded out the top five. Trey Beene of Bossier City, La., was running second when engine problems forced him out on lap 26.

The most significant caution was on the sixth lap when turns one and two became a parking lot on a restart in an accident involving a dozen cars.

"I don't know how we didn't hit anybody," Bagley said. "I went through the infield and I just knew I couldn't keep it from stopping (to maintain his position)."

Notes: Bagley's Rocket Chassis is powered by a Clements Racing Engine and sponsored by P&W Sales & Oilfield Mfg., Mr. Frank Motorsports, Southern Transport, 360 Motorsports, Outerwears, Club 29, Hyperco, J&J Motorsports and MSI. ... Bagley, the O'Reilly SUPR point leaders, has three SUPR victories at USA Speedway and two on the Comp Cams circuit. ... His only loss at the track came last season when he finished 19th in a SUPR event. ... The checkered flags flew on the 40-minute feature at 12:40 a.m. ... Four cautions slowed the race and 12 drivers were running at the finish. ... Bill Frye won the first-ever Late Model race at USA Speedway in May 2010 and has finished no worse than third in three series appearances at the track. ... Frye's former teammate Johnny Virden of Russellville, Ark., was part of a three-car heat race accident that damaged his car. Virden and his crew received many helping hands in the pits to make repairs and he finished ninth in the main event, gaining 10 positions.