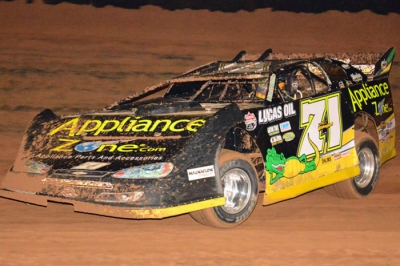 TUSCUMBIA, Ala. (July 29) — Chris Wall of Springfield, La., survived a wild Shoals Shocker 50 at North Alabama Speedway for a $5,000 victory at the high-banked 3/8-mile oval.

The third of three leaders, Wall survived a lap-41 spin that was blamed on another driver and held on the rest of the way in an unsanctioned 50-lapper with several cautions, a few pileups and plenty of action. | Slideshow

Ronnie Johnson of Chattanooga, Tenn., finished second with Klint Byars of Carrollton, Miss., who led laps 11-35 in third place. Anthony Burroughs of Muscle Shoals, Ala., and Rick Rickman of Columbus, Miss., rounded out the top five in a race where three second-running drivers — Josh Putnam of Killen, Ala., David Breazeale of Four Corners, Miss., and Tony Knowles of Tyrone, Ga. — were knocked out of contention in one way or another.

Eleven of 24 starters were running at the finish and Johnny Stokes of Columbus, Miss., was taken to a nearby hospital after a lap-23 pileup. He was reportedly released within a few hours.

Fast qualifier Ronny Lee Hollingsworth of Northport, Ala., started on the pole and took command at the outset, but his lap-10 spin handed the lead to Byars with Putnam, Stacy Taylor of Jacksonville, Ark., and Scott Creel of Franklinton, La., restarting behind him.

Taylor and Putnam made contact on the double-file restart, and Putnam ended up over the berm in turn one, costing him 11 positions before he gathered up his No. 212.

Byars stayed in control but before the race reached the halfway point, Stokes spun to draw a lap-22 caution. Just a lap later there was a big pileup on the backstretch involving Stokes, Mark Fields, David Gentry and Putnam, who tried to find a way through but ended up with heavy damage. All four drivers retired with Stokes seeking treatment.

Byars led past the halfway point with Breazeale in pursuit, but Breazeale got into the frontstretch wall, ending his night.

A lap later, Byars led Wall, Knowles, Billy Moyer Jr. and Taylor, but the leader got too high in turns one and two, allowing Wall to take the lead as Johnson was also suddenly in contention.

Wall was leading Knowles on lap 41 when Knowles tried a move on the outside. The frontrunners got together and Wall spun. Officials rules Knowles caused the caution and sent him to the tail, but he chose to retire.

Wall led the rest of the way for a victory delayed by a lap-48 pileup that involved Burroughs, Taylor and Brian Rickman.

Notes: Wall's MasterSbilt Race Car is sponsored by Appliancezone.com, C&M Gator Farm and X-treme Graphics. ... Wall notched his fourth special event victory of the season. ... Three drivers broke the 13-second barrier in qualifying. ... Next up at North Alabama is an Aug. 12 event for USCS sprint cars.