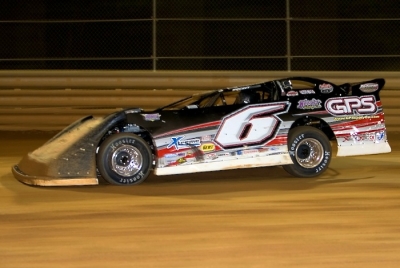 JAMAICA, Va. (July 23) – On one of the hottest days of the year in eastern Virginia, one of the nation’s hottest drivers cooled the field in Saturday night’s Summer Heat 50 at Virginia Motor Speedway as the Ultimate Super Late Model Series made its first visit to the half-mile racetrack. | Slideshow

Steve Shaver of Vienna, W.Va., moved by Jamie Lathroum of Mechanicsville, Md., on lap 20 and held off a late challenge by Jeremy Miller of Gettysburg, Pa., on his way to scoring a $10,000 a victory. The amount pushes Shaver's total winnings in two races this year at VMS to $35,000 after he also won the World of Outlaws Late Model Series-sanctioned Commonwealth 100 at the high-speed oval in March.

“I know what the staff here at VMS is doing to get such a great track in temperatures like we had today but keep it up,” Shaver said in victory lane. “I really have to thank the Rumleys. They give me a great car to drive every time and I have to say I really love this facility.”

Miller followed Shaver to the finish in the second position with Lathroum holding third. Casey Roberts of Toccoa, Ga., was forth with Jonathan Davenport of Blairsville, Ga., rounding out the top five.

Ross Bailes of Clover, S.C., and Roberts led the field to green with Bailes leading the first lap. Lathroum dove inside Bailes exiting turn four on lap two and took the lead by inches at the line.

Davenport moved by Shaver for second on lap six and looked to be headed to the front before jumping the cushion on lap 10. After regaining control, Davenport reeled in Lathroum by lap 16 and moved to the high side to take the lead exiting turn two.

But Davenport’s lead was short lived as Lathroum battled back in turn three. The two made contact and Lathroum came out of turn four back ahead with the lead as Shaver followed him into the second position.

Lathroum chose to start on the inside for a double-file restart on lap 19, putting Shaver directly to his outside. As the two raced into turn one, Shaver powered around the outside of Lathroum. The two raced door-to-door around the track with Shaver taking the lead by inches at the line.

Lathroum stayed on the inside of Shaver for the next two laps before Shaver finally secured the top spot.
Miller moved by Lathroum for second on lap 31 and made a late charge to rundown Shaver. But Shaver was able to keep a couple of car lengths between himself and Miller and went on to score the victory.

Notes: Shaver's K&L Rumley Motorsports Rocket Chassis is sponsored by GPS Supply Company, CV Products, Sunoco Race Fuels and Hoosier Racing Tires. ... The victory is Shaver’s fifth payday of$10,000 or more this season as he competes in limited action in the K&L Rumley entry. ... Bailes, the polesitter, faded out of contention after leading lap one and ended up 12th. ... Series points leader Chip Brindle of Chatsworth, Ga., finished ninth. His closest competitor in the standings, Chris Ferguson of Mount Holly, N.C., was unable to start the feature. ... Rickey Elliott brought out the lap-19 caution when he came to a stop in turn three. ... The Ultimate Series returns to action July 30 with a trip to Wythe Raceway in Rural Retreat, Va., for a $5,000-to-win event.