Chanler grabs SUPR victory from pole at I-30 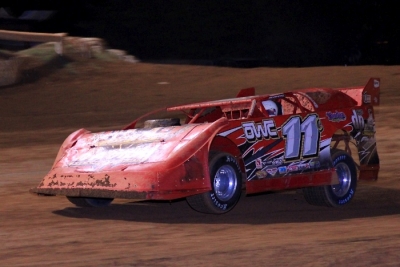 Jeff Chanler heads for victory at I-30 Speedway. (Best Photography)

Chanler lead flag-to-flag in the 40-lapper at the quarter-mile racetrack, but had to survive a late charge from Allen Tippen to secure his first series victory of the season and eighth of his career. | Slideshow

After requiring two attempts to get the race started, a three-car accident with one lap completed immediately slow things back down. Jim Bryant, Ray Moore and Wesley Crutchfield piled up in turn four, ending Bryant and Moore's nights early.

The race picked up life for a 10-lap, green-flag run as Chanler took control and opened up a two-second advantage over Chris Holley of Dayton, Texas. Chanler's pace brought him into slower traffic by lap six, but a spin by Brett Frazier brought out the race’s second caution just after to 10-lap mark.

Two more cautions appeared by lap 13, before the race saw the longest green-flag stretch of 20 laps. At the midway point of the race, Chanler enjoyed nearly a three-second cushion over the second-running Holley and third-running Tippen.

A close battle for second between Holley and Tippen ignited just after lap 20 as they reeled in the leader. The two drivers raced door-to-door with 10 laps remaining, drawing to within a few car lengths of Chanler. Tippen took over second on lap 32 while Holley's night came to an end the next lap when he lost a rear-end and slowed to a stop on the backstretch.

Tipped allowed Adams to slip by him on the restart, but he regained the spot with three laps remaining and mounted a serious challenge to end Chanler’s race-long dominance.

Tippen drew to within a car length of Chanler on lap 38 and pulled alongside as the two leaders took the white flag. The pair raced side-by-side on the final lap, but Chanler hit his marks perfectly in turns three and four and edged Tippen by three-quarters of a car length at the flagstand.

Notes: Chanler's Barry Wright Race Car is powered by a PTS Racing Engine and sponsored by David Peterson Contracting, OWC Welding, All Star Performance, David's Transmission, and AD Signs. ... Chanler's victory was just his second on the series since the 2006 season. His previous SUPR victory came June 12, 2010, at Devil's Bowl Speedway in Mesquite, Texas.... The victory ended a 33-race winless streak for Chanler, which dated back to June 12, 2010 at Devil's Bowl Speedway in Mesquite, Texas. ... Shane Diamant of Maumelle, Ark., had a scary moment in the first heat race when his car went off the track's embankment. He was uninjured in the accident, but his race car was too damaged to continue. ... The next series event is scheduled for July 30 at Baton Rouge Raceway in Baker, La.