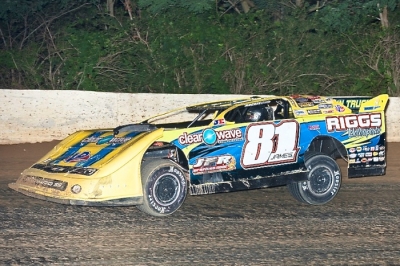 UNION, Ky. (July 23) — Scott James won a slugfest with Darrell Lanigan at Florence Speedway on Saturday in a slide-jobbing, paint-swapping and wall-banging battle that lasted 50 laps at the half-mile oval.

The 39-year-old James, of Lawrenceburg, Ind., grabbed the $5,000 winner's purse in the unsanctioned tuneup race for next month's Sunoco Race Fuels North-South 100, but his car had to be towed off the track after James slid across the finish line and into the wall in a tangle with lapped cars. | Slideshow

Lanigan, who lives near the racetrack, was able to drive his nephew Terry's No. 28 back to the pits after the race, but the car had its share of contact, including when the frontrunners collided in turn three as Lanigan took the lead.

The two exchanged handshakes at the scales after the exciting race.

"I didn't know he was there," said James of the contact between the two on lap 21.ï¿½ "I was behind (Tim) Prince and I thought I was low enough to pass him, and there comes Darrell, he hit me pretty good, I thought I broke a shock or something, it took me a couple of laps to regain my thoughts.

"He apologized to me afterwards and that's good enough for me, I think I had a harder left rear tire on, the track was fast up high, I thought when I cleared him that one time, I had him, but then he came back and repassed me, and with five (laps) to go, I thought it was time to go. I had enough patience there to get back by him."

the 41-year-old Lanigan, who settled for second, talked about the good hard racing between the two drivers, both who will be running for their first North-South 100 victories in three weeks.

"I got into him there early on," Lanigan said. "I had a run down the back stretch. He didn't know I was there and I came down there and jumped over his left front tire, that wasn't the way I wanted to pass him. He had a good car, probably the best one out there."

Mike Jewell of Scottsburg, Ind., was third with fast qualifier John Gill of Mitchell, Ind., in the fourth spot. Home-state driver Brad Neat of Dunnville, who started 16th rounded out the top five. Polesitter Jesse Lay of Walton, Ky., led the first lap but was an early departee along with Josh McGuire of Grayson, Ky., who also ran in the top five early.

James took the lead from Lay on the second lap while Lanigan quickly moved into second. The frontrunners entered traffic after 15 circuits and Lanigan went ahead on the 21st lap after the turn-three collision.

Lanigan edged away while Jewell pressured James for second, and the top three broke away running nose to tail into the second half of the race.

James overtook Lanigan on lap 30, but a caution erased the move, and Lanigan fought off two more slide jobs by James after the restart. James finally made the move stick on lap 45, and while it was the winning pass, it wasn't the end of the action.

Exiting turn four and heading for the checkers, the slower cars of Rod Conley and Bill Blair Jr. were just ahead of the leaders. Lanigan pulled alongside with James, who was able to win the race to the finish after making contact with Blair's car, a collision that sent James headlong into the frontstretch wall. A trip to victory lane lessened the pain for James, who thanked car owner Scott Riggs.

"We are having a pretty good year," James said. To come here in a couple of weeks and win the North-South would be the highlight of my career, no doubt about it."

Notes: James pilots a Jay Dickens-powered Rocket Chassis for Harrisburg, Ill.-based Riggs Motorsports sponsored by Clearwave Communications, Murphy Motorsports and JFR Graphics. ... The victory was the third of the year for James, who frequently runs at Florence. ... The $50,000-to-win Sunoco Race Fuels North-South 100, a Lucas Oil Late Model Dirt Series, is scheduled for Aug. 12-13 at Florence.