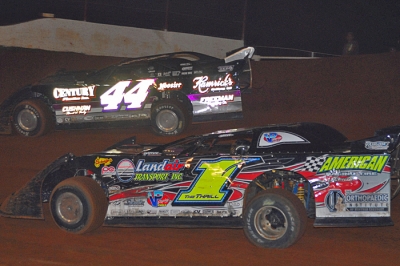 The Mosheim, Tenn., driver may have been fast enough to win the 53-lap feature without any help, but after a bobble in traffic dropped him to third early in the race, Hill needed a little luck to make his way back to the front. | Slideshow

Hill’s luck came in the form of misfortune for his closest competitors. Tony Knowles of Tyrone, Ga., and Chris Madden of Gray Court, S.C., who wrapped up his third series championship just by starting Saturday’s race, each had trouble while leading, lifting Hill back to the lead and a $5,300 victory at the third-mile oval in east Tennessee.

The pole-starting Hill led the first four laps of the race, before he had to check up when he caught the tail of the field, allowing both Knowles and Madden to overtaking him. Knowles began flexing his muscle around the high-banked racetrack, but he had his own problem with traffic on lap 10 when he tangled with Chad Ogle Sevierville, Tenn., while trying to put him a lap down.

Knowles’s miscue moved Madden to the point with Hill following close behind in the second position. The two leaders battled close throughout the middle portions of the race with Hill making multiple attempts to pull alongside Madden.

But each attempt failed, and Madden seemed to be on his way to capping his Southern Nationals championship in style before a broken left-rear wheel sent him to the pits on lap 42. Hill assumed the lead once again following Madden’s demise and pulled away from Billy Ogle Jr. of Knoxville, Tenn., in the closing laps on his way to recording his second career Southern Nationals victory.

“Lapped traffic around here, you gotta really get busy around ‘em,” Hill said following his victory. “I kind of checked up and gave up first and second to Knowles and Chris. I ran ‘em back in and was racing real hard. Knowles had his trouble, then Chris and I had a hell of a race. It was a fun race and we were back and forth, back and forth. I don’t know if I ever would have cleared him if he didn’t break a wheel. That was unfortunate for him.”

The fourth-starting Ogle finished second for his third consecutive top-five finish on the tour, including two runner-up efforts. Eric Jacobsen of Seacliff Beach, Calif., was third, to also give him three straight top fives. Tommy Kerr of Maryville, Tenn., was fourth with Mark Vineyard of Powell, Tenn., rounding out the race’s top five finishers.

Madden ended up sixth after his crew replaced the broken wheel under caution. While he was disappointed in the missed opportunity, the series champion said he was happy with his overall performance on the two-week tour.

“We put ourself in position to win the race,” said Madden, who was gunning for his fourth series victory that would have given him a sweep of the tour’s three-race Tennessee swing. “Right there at the end of the race we broke a left-rear wheel and that ended up our night and our winning streak. We come out with the points championship and won some races that we wanted to win. We had a great series and we can’t complain much about all our finishes. We’d like to win ‘em all, but we ran good and had a good two weeks.”

Even though he was the first of the race’s 22 starters to drop out of the race after starting from the front row, Knowles still wrapped up the second position in the final series standings.

“Vic got a little better jump than us and in lapped traffic he bobbled and we were able to take advantage of it,” Knowles said. “A few laps later lapped traffic seemed to take its toll on us. Rough night, but we got second in the points, so we’ll take that and go back and fix our race car and maybe come back and maybe lapped cars won’t take their toll on us as bad as they did this time.”

Notes: Hill's Warrior Race Car is powered by a Vic Hill Race Engine with sponsorship by Landair Transport, Pilot Travel Centers and Preferred Sandblasting. ... Consolation races were scrapped with rain threatening the program. The entire lineup was set solely on qualifying. ... Hill’s previous Southern Nationals victory came at Wythe Raceway in Rural Retreat, Va., in 2009. ... Hill changed a right-rear tire in the infield prior to the drop of the green flag. ... Stacy Boles had a solid top five run going until a flat right-rear tire sent him into the pit area on lap 46. The top five in series points standings were virtually locked into place before the finale and an awards ceremony was held in victory lane before the race program started at Tazewell. Madden earned $5,353 for his third title on the Ray Cook-promoted tour. ... Madden, Knowles, Johnny Pursley and Donald Bradsher were the only drivers to enter all of the tour's nine events.