Madden tops Ogle for $3,500 at Cleveland 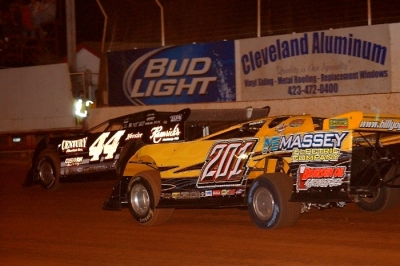 Madden, who’s gunning for his third title on the mid-summer mini-series, moved from fourth to second on the start of the 35-lap race and outdueled Blount Motorsports teammates Billy Ogle Jr. and Tommy Kerr on his way to picking up his second victory on the series in 2011 and 16th of his career.

The pole-starting Kerr of Maryville, Tenn., grabbed the lead on the start of the race while Madden made his move forward. Madden moved around Kerr as the two cars made contact on the back straightaway on lap seven, bringing the third-starting Ogle along with him into second.

Kerr battled back, moving back ahead of Ogle on lap 10 before briefly retaking the lead when Madden was slowed by traffic on lap 12.

But Madden proved too much for Kerr, and again drove to the point on lap 15 after a three-lap, side-by-side battle between the two leaders. Ogle moved to second midway through the race, but didn’t have enough to overtake Madden, who led the remaining distance on his way to the victory.

“It was pretty tough to begin with,” Madden said of his early battle with Kerr. “We got by Tommy and got by the lead, then a lapped car got into me and gave Tommy the lead back. We got back single-file and we drove back by Tommy again. Billy gave me a great run. He drove me real clean and run me hard till our tires came in. When they came in we kinda set our own pace there and went on our way.”

Ogle settled for the runner-up finish while Ronny Lee Hollingsworth of Northport, Ala., made his way to third at the finish after starting fifth. Shane Clanton of Fayetteville, Ga., charged from his 11th starting spot to finish fourth with Eric Jacobsen of Seacliff Beach, Calif., rounding out the top five finishers. Kerr faded to sixth at the finish.

Notes: Madden's Bloomquist Race Car is powered by a Cornett Racing Engine and sponsored by Century Plastics, Cushman Paint & Body and Hamrick's of Gaffney. ... The race was slowed by two cautions. The appeared on lap 13 when Donald Bradsher slowed and the second was caused by a Chip Brindle spin on lap 22. ... Madden’s previous victory this year came July 12 at Carolina Speedway in Gastonia, N.C. ... The victory is Madden’s second Southern Nationals victory at Cleveland; his first came in 2009. ... Ogle earned $5,000 at Cleveland Saturday night for a Southern All Star Dirt Racing Series victory at the east Tennessee racetrack. ... The Schaeffer Oil Southern Nationals moves to Volunteer Speedway in Bulls Gap, Tenn., Friday night for a $5,300-to-win event before wrapping up the tour Saturday at Tazewell (Tenn.) Speedway.