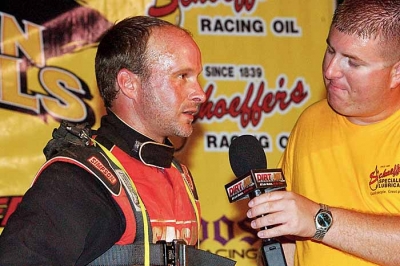 The fourth-starting Roberts of Toccoa, Ga., trailed Davenport of Blairsville, Ga., for the majority of the 35-lap race and moved to challenge for the lead before the race’s first caution appeared on lap 21. Roberts stayed close to Davenport following the restart and was in position to capitalize on lap 30 when Davenport’s right-rear tire shredded abruptly in turn four.

“We were pretty good at the first part of the race,” said Roberts, who notched the sixth Southern Nationals victory of his career. “We were good for the most part of the night and was there to capitalize. I hate for anybody to have bad luck, but we’ve lost ‘em that way and won ‘em that way; it goes both ways. We were looking under Jonathan a time or two there in lapped traffic. It was pretty hectic.”

The breakthrough triumph couldn’t have come at a better time for Roberts, who after winning nine special event victories in 2010, was yet to be victorious after struggling through the first half of 2011 in his Jimmy and Ann Cushman-owned race car.

“We’ve been needing this for so long here,” Roberts said. “We’ve just had a bad first part of the year, and I can’t thank Mr. and Mrs. Cushman enough. The Lord’s blessed me with such good people there. They don’t ever complain when we have off nights like we have had this year.”

Fifth-starting Tony Knowles of Tyrone, Ga., followed Roberts to the finish in the second position while series points leader Chris Madden of Gray Court, S.C., recovered from near disaster when he nearly went over the turn-four banking early in the race to finish third. Davenport restarted eighth after swapping his flat tire and recovered to finish fourth. Ty Dillon of Welcome, N.C., was fifth.

The disappointing finish continues a string of frustration for Davenport on this year’s Southern Nationals. Besides his $5,300 victory Sunday at Rome (Ga.) Speedway, the defending series champion has mostly been plagued by bad luck thus far on the 10-race tour, including another potential victory gone awry when a broken transmission knocked him out while leading a series event at Carolina Speedway in Gastonia, N.C.

“Another night just like this year.” Davenport said of his misfortune. “If we can ever catch a break we’ll be hell on wheels. We had a fast car and set fast time. The right-rear never shook and I didn’t blister it, so I must’ve run over something. ... when luck’s not on your side you can’t win no matter how good you are.”

Notes: Roberts’s Victory Circle by Moyer Race Car is sponsored by Cushman Paint and Body. ... Phillip Pittman barrel-rolled his No. 3 entry several times after heading over the turn three banking in a consolation race. He was not injured, but did not start the main event. ... Dennis Franklin of Gaffney, S.C., experienced terminal motor issues on lap six, while Brent Dixon went up in smoke to bring out the lap-21 caution. ... The Southern Nationals will take a day off on Wednesday before heading to the Volunteer State of Tennessee to wrap up the tour with a trio of shows at Cleveland Speedway, Volunteer Speedway in Bulls Gap and Tazewell Speedway.