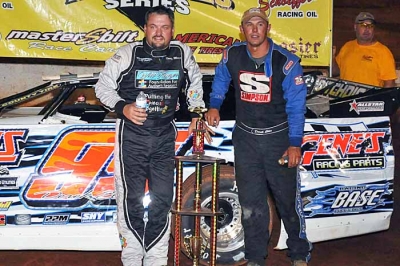 Driving Derek Ellis’s backup car, Weaver started second in the 53-lap race and moved to the lead over the third-starting Madden of Gray Court, S.C., on the opening lap. Madden slipped by Weaver on lap two, setting off a lead-swapping battle between the two drivers that lasted for nearly all of the race’s first 10 laps.

After finally clearing Madden for good on lap nine, Weaver opened up a comfortable advantage that gave him enough room to hold off the late charge by 15th-starting Ronnie Johnson of nearby Chattanooga, Tenn., on his way to winning the event that was postponed by rain on July 14.

“We swapped the lead back and forth two or three times,” Weaver said of his battle with Madden. “I knew our car was real good, I just needed to get some heat in our right-rear tire. Once we done that we slipped back by him and it seemed like I could see the track going away and I could maneuver real good.”

Johnson, the Hall of Famer who’s never won a Southern Nationals event, started 15th and went to the tail of the field after suffering a flat tire in a pileup on the first attempt to start the race. Rebounding from the setback, Johnson stormed into the top five by the midway point of the race. He moved by Madden for second on lap 51, but by then Weaver was out of reach.

“We had to go to the tail and the car just started going,” Johnson said of his run to the front. “We could just pass people and got up to second. I don’t know if any of those guys had any troubles or not, but it just seemed like when we got some room and got to them we were a little better than they were through the corners.

“I sure wish we could have had a few more laps so I could have raced with (Weaver),” Johnson added. “Randy and I’ve had some really good races. Would’ve loved to had a caution or maybe wouldn’t have had to start in the back or whatever. But not making any excuses, we ran second.”

Notes: Weaver’s Derek Ellis-owned GRT is powered by a Vic Hill Racing Engine with sponsorship from Ellis Contracting Inc., Gene’s Racing Parts and Base Racing Fuel. ... The prelims for the event were held July 14 before rain force the postponement of the main event. ... David Payne of Murphy, N.C., was scheduled to start second, but was unable to attend the rain date due to work commitments. That moved the entire outside lane up a row in the starting grid, giving Weaver his front-row starting spot. Polesitter Mike Marlar of Winfield, Tenn., piloted Vic Hill's entry after engine woes sidelined his Warrior House Car. Marlar looped his borrowed ride in turn two on the opening lap and collected Jonathan Davenport, Tyler Ivey, and Johnson among others. Marlar ended up 18th while Davenport, the series defending champion was 20th. Ivey salvaged a 10th-place finish. ... The next show for the Schaeffer Oil Southern Nationals Series will be Tuesday night at East Alabama Motor Speedway in Phenix City, Ala.