Davenport rebounds with $5,300 victory at Rome 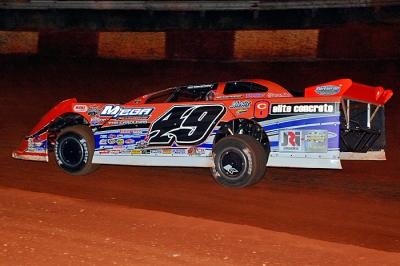 Jonathan Davenport heads for a $5,300 victory at Rome. (focusedonracing.com)

Davenport started from the pole of the 53-lap race and after slipping back to second on the opening lap, took control when race-long leader Ty Dillon of Welcome, N.C., suffered a flat tire under a lap-15 caution. Davenport led the remaining distance and held off Chris Madden of Gray Court, S.C., and Casey Roberts of Toccoa, Ga., to earn the fifth victory of his career on the 10-race tour.

“This thing’s been like a roller coaster,” said Davenport, whose prior struggles on the tour include a broken transmission while leading the series event at Carolina Speedway in Gastonia, N.C. “Every time we get knocked down, we keep building and keep building and then soon as we get back to the top it feels like it just falls out from under us. But we never took our hands off of it and never gave up. We just kept working at this thing.”

The race wasn’t all smooth sailing for Davenport after he moved to the front. He had to navigate the fast and tricky racing surface around the high-banked racetrack while using nearly every inch of the racing surface to keep both Madden and Roberts at bay.

“They was going high, low every other lap,” Davenport said of his challengers. “I just tried to find me one consistent line, but I don’t think I ever even done that. It was so rough getting into (turn) one down here, I never really knew exactly where to go. I don’t think there’s a place on this racetrack I haven’t been.”

Madden and Roberts dueled side-by-side for nearly 20 laps with Madden taking the position at the finish to notch his fourth top-five effort in the first tour’s four races. The result extends his lead in the tour’s points standings as he chases his third series title.

While he was happy to score another strong finish, Madden, who started sixth and fell back early before charging forward, felt he had a shot at winning the race if not for some untimely cautions late in the race.

“We had a good car tonight,” said Madden, who won the Southern Nationals championship in 2007 and 2008. “I think my race car was a little bit free at the beginning and we feel back a little bit and then we started inching our way back to the front. We had a few cautions right there at the end that helped Jonathan and saved those guys cause I had him and Casey there on the outside. I felt like we were gonna be able to make the pass and the caution came out.”

Roberts settled for third after starting second while Chris Ferguson of Mount Holley, N.C., advanced from his seventh starting position to finish fourth. Tenth-starting Aaron Ridley of Chatsworth, Ga., also moved forward throughout the race and held the fifth position at the finish. Dillon, who moved from third to first on the initial start of the race, salvaged an eighth-place finish after suffering the lap-15 flat.

Notes: Davenport's Barry Wright Race Car is sponsored by Mega Plumbing, En Compass Solutions, Elite Concrete, Baird Transports, Nicholls Plumbing and JRI Shocks. ... Davenport’s best finish in the first three series events was a ninth in the opener at Wythe Raceway in Rural Retreat, Va. ... Ronnie Johnson was the hard charger of the race. He picked off nine spots from his 15th starting position to finish sixth. The Schaeffer Oil Southern Nationals will resume Monday with the rain-postponed feature at the North Georgia Speedway in Chatsworth, Ga. With the field set based on preliminary events held before rain moved in Thursday, Mike Marlar of Winfield, Tenn., is set to start from the pole of the $5,300-to-win event.