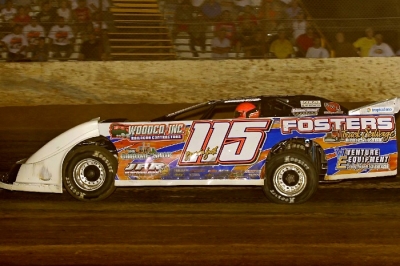 After moving to the lead over fellow front-row starter Jon Mitchell of Texarkana, Ark., on the start, Smith turned back several early challenges for the top spot before pulling away to a flag-to-flag victory in the 35-lapper.

Dane Dacus of Lakeland, Tenn., came from outside the third row to finish second while Mitchell ended up third. Bill Frye of Greenbrier, Ark., and Todd Hall of Charleston, Mo., rounded out the top five.

Notes: The winner's race car is sponsored by Fosters Truck Salvage and Venture Equipment. ... The event was the second race of a doubleheader weekend for the series. Jon Kirby of Russellville, Ark., won Friday night’s race at Beebe (Ark.) Speedway. ... The two races were the first two legs of the RicTec Summer Series, which pays a $1,000 bonus to the driver earning the most points over four races. The final two races on the mini-series are an Aug. 5-6 doubleheader at Malden (Mo.) Speedway and I-30 Speedway in Little Rock, Ark. ... Gary Christian of Broken Bow, Okla., earned the race’s hard charger award with his 17th-to-10th run. ... Among drivers failing to make the feature lineup was Justin Asplin, who saw a transfer spot to the feature get away from him when mechanical issues struck late in the consolation race. ... Kyle Beard of Turmann, Ark., continues to lead the series standings with Mitchell 11 points back in second. Johnny Virden of Russellville, Ark., is third with Smith and Kirby rounding out the current top five.