Dixon holds off Overton for $5,300 at Screven 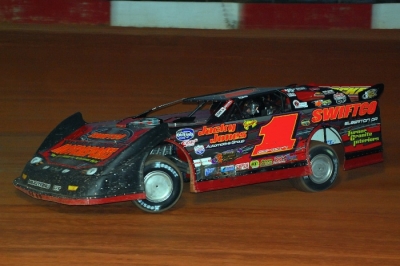 Dixon, who started on the pole, earned $5,300 as he held on over the final laps for the victory as he inched lower and lower into the bottom groove to hold off Casey Roberts of Toccoa and then a charging Brandon Overton of Appling.

"I saw Casey get up besides me about halfway, and I knew I had to move down. I knew the bottom was better. I just had to figure out how to get down there. Once I got down there, I felt like I was pretty comfortable. I felt like I could stay where I was at again," Dixon said. "I knew Brandon had a 12-inch spoiler on there, and I knew that was going to be hard to beat because he could slow up and stay in the bottom so much better, have a lot more sidebite and forward bite. I knew he was going to be a tough runner right there at the end. It worked out for the best for us."

Overton, a Screven winner last month in NeSmith Chevrolet Series Crate Late Model action, rallied from seventh to finish second, putting the heat on Dixon with his spec-engine equipped car that allowed him a taller spoiler.

"I went kind of easy for the first half of the race because we went with a little softer tire, and I was kind of scared I was going to burn it up or used it up too early," Overton said. "We had a good car. I feel like we should've won the race. I think everybody else knows, too. It was a good race. The racetrack was good and it suited our motor program really good."

Ninth-starting Johnny Pursley of Clover, S.C., was third followed by Roberts, who started and finished fourth. Series points leader Chris Madden of Gray Court, S.C., started third and slipped back to fifth at the finish.

Reigning series champion Jonathan Davenport of Blairsville, Ga., had another rough evening, as he spun on the first lap of the race and was later caught up in a multicar pileup on the front stretch on lap 16.

Notes: Dixon's Rocket chassis is sponsored by Swiftco, Jacky Jones Automotive Group and Turner Granite Interiors. ... "Those first 30 laps, they were slow. It felt like a caution every five laps," Dixon said. "I was like, 'Man, are we ever going to get done with this thing?' As we got to going, that last 23 (laps) went really quick on me. Next thing I knew, I thought I saw him drop the white, and I said, 'Is that the white flag?' And I came back around he dropped the checkered." ... Third-place finisher Johnny Pursley is still looking for his first Southern Nationals victory. "We like this track. We kind of missed it a little bit in qualifying. I knew we'd be good. We had a real good hot rod in the heat race," he said. "Congratulations to Brent, I know he needed that. Hopefully we can get there soon." ... Consolation race winner John Henderson of Aiken, S.C., damaged his powerplant en route to his consolation race victory and scratched from the main event. Former race winner Henry Carter was added to the starting lineup in his place. ... Among drivers failing to make the feature: Branden Yawn, Michael Akeson, Colby Cannon and Bobby Morris. ... Next up for the Southern Nationals is a $5,300-to-win event Sunday at Rome (Ga.) International Speedway.