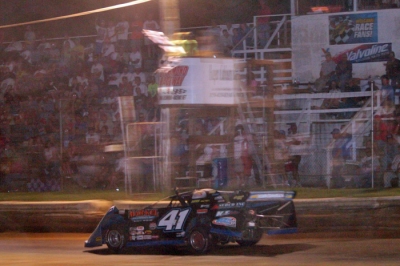 RICHMOND, Ky. (July 16) — "Have you ever seen a wilder night of racing?" wondered Josh McGuire early Sunday morning at Richmond Raceway. "From bad luck for some folks to someone in the stands getting hit by something to that one deal earlier to those guys back in the field then somebody walking along the track flipping me off and I'm thinking, 'I don't remember hittin' nobody.' "

McGuire's summation of the Butterball Wooldridge Memorial in a nutshell wrapped up a night of what looked to be an on-track tragedy for the nephew of the race's namesake, a mid-race crash and brawl, and a late-race charge by Dustin Neat. All the while the Grayson, Ky., driver methodically steered to a $7,500 victory, the largest payday in the race's 24-year history. | Video | Slideshow

Neat of Dunnville, Ky., settled for a second-place finish at the 3/8-mile oval while Duane Chamberlain of Richmond, Ind., and Greg Johnson of Franklin, Ind., followed to the checkers in the unsanctioned event.

At the outset of the 50-lapper, the polesitting McGuire grabbed the lead, bringing third-starting Tim Tungate to second while Duane Chamberlain, who started outside the front row, settled into third. Johnson and Neat battled for fourth.

As McGuire took his near straightaway lead into lapped traffic, Tungate faded out of the top five while 10th-starting Dustin Linville moved to fifth. Johnson pressured Chamberlain for second as the duo began to slowly reel in McGuire.

With the leader bogged in heavy traffic, the first caution slowed the field. Cars circled the track emergency personnel left the infield to attend to a fan who had been struck by a wheel covering that cleared the frontstretch catch-fence.

Following another caution for Aaron Hatton, McGuire stayed in command while Neat moved under Johnson taking third. Behind them, Linville, Michael Chilton and Victor Lee waged war for fifth. Following contact between Lee and Linville, the battle came to an end when the two crashed in turn four, sparking scuffling between the teams in the infield.

On the restart, Neat took second from around Chamberlain as McGuire inched away. Chamberlain and Johnson continued to battle for third. With a caution in the waning laps for Tyrel Todd, Neat was able to poke a nose to the outside of turn one on the restart before settling into second as McGuire drove to the track's richest payday.

"It was crazy with lots of cautions. Maybe not as many as I thought there'd be but a bunch," McGuire said. "I didn't want to see those cautions. I was on harder tires and it would take me five or six laps to get rolling. But for those first few laps I wasn't that great. I was real good after a few laps but for the first few I wasn't all that good. I was thinking there's got to be somebody right there."

McGuire, who earned $3,000 the previous night at Skyline Speedway in Stewart, Ohio, was glad for a solid week after recent inconsistency.

"It's been so long since we've won a good race. We've been real fast for the past couple of months but we haven't finished worth a darn. You know how the racing circuit goes — we were on the bottom ledge of it then you start coming up and then you want it to just keep going," McGuire said, struggling to explain his team's path. "I don't care if it just flattens and goes flat for a while. I just don't want it to go down. That'd be a triangle wouldn't it?"

Neat didn't quite have enough at the end to overtake McGuire.

"We were a little harder on tires and started out there just biding our time and I found a little cleaned up spot on the track and our tires fired and we got by Johnson and Chamberlain and pretty much used my car up getting there," Neat said. "It was a good race for Josh. When everybody got on the bottom and blew all that dust out there it just freed us up so much I'd about spin out. It was a good run for our team."

Notes: McGuire's MasterSbilt is powered by a GCP Racing Engines and sponsored by DJs Kitchen Corner, SEBCO, Inc., Mar-Kel Enterprises, Youngblood Concrete, K&E Trucking, Budda and PRC. .... Fourth-starting Mike Jewell dropped out during the race's first caution after fading through the field. ... Buzz Williams drove a 2002 Rayburn normally driven by Wesley Brummett into the main even via the consi. ... At the conclusion of the second heat, Billy Wooldridge's car cut across the front straightaway, taking down a portion of infield guardrail before coming to rest in turn two. Safety crew hurried to check on Woolridge and the driver was quickly removed and paramedics administered CPR. He was taken to a nearby hospital but there was no immediate word on his condition. Wooldridge, the nephew of Paul "Butterball" Wooldridge, has raced regularly throughout central Kentucky for many years. ... A running feud between Victor Lee and Dustin Linville came to a head midway through the 50-lapper as they advanced through the field, finally battling with Michael Chilton for fifth. Lee pulled to the outside of Linville in turn three, and repeated contact resulted in Linville driving Lee into the turn-four wall. Lee quickly exited his car as crews scuffled in the infield. Linville pulled to the pits then crossed the track going to the infield where crews again scuffled before being separated.