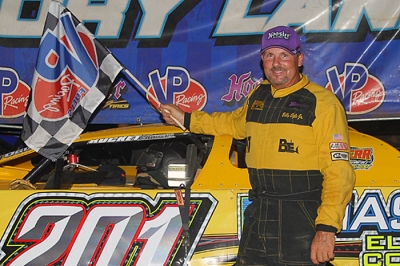 CLEVELAND, Tenn. (July 16) – After ending a six-year drought on the Southern All Star Dirt Racing Series with his victory Friday night at Boyd’s Speedway in Ringgold, Ga., Billy Ogle Jr. didn’t waste any time scoring his next series victory.

The Knoxville, Tenn., driver was back in victory lane less than 24 hours later after winning Saturday night's Southern All Star race at Cleveland Speedway to complete a sweep of the series weekend doubleheader. The pole-starting Ogle led all 50 laps of the caution-free race Saturday night and earned $5,000 for the first victory of his career at Cleveland. | Slideshow

“This is the only track I haven’t been able to conquer throughout my 30 years of racing," Ogle said of the third-mile oval near Chattanooga. "I’ve had some good runs here. I’ve had a couple seconds, but I’ve always struggled here. The surface is hard to get ahold of for me. I just finally got it all put together tonight and it worked out good for me.”

Notes: Ogle drives a Rocket Chassis for Blount Motorsports with sponsorship from Massey Electric Company, Bearden Oil and Stowers CAT. ... Ogle’s victory Friday night at Boyd’s paid $4,000. ... His previous victory before Friday came at Atomic Speedway in Knoxville, Tenn., in 2005. ... The series returns to action July 30 with the $5,400-to-win Michael Head Jr. Memorial at Talladega Short Track in Eastaboga, Ala.