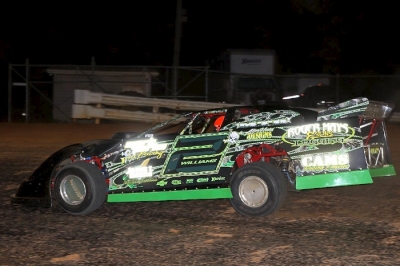 NATURAL BRIDGE, Va. (July 15) — Taking advantage of the polesitter's early miscue, outside front row starter Justin Williams of Shipman, Va., grabbed the lead at the outset and led all the way Friday at Natural Bridge Speedway for a victory on the D&D Auto Recycling Steel Block Bandits circuit. | Slideshow

Williams, the leading of the track's Limited Late Model division in his rookie season, deftly handled lapped traffic in racing to the $2,000 victory.

Polesitter Rick Singleton of Huntington, Pa., got too high on the berm at the outset and slipped back early. He ended up sixth.

Notes: Winner Justin Williams ran in the street stock division last year. ... Joe Leavell was making his first start since suffering injuries in a motorcycle accident a month ago. ... Booper Bare, in the battle for the series points lead, slowed at the outset to bottle up the field, causing spins by John Groome and Tim Stainaker to spin. Bare restarted on the tail but a broken distributor forced him out with a last-place finish. ... Eighteen of 24 starters were running at the finish. ...D.J. Troutman finished third in the second heat, but a blown motor ended his night. ... The Steel Block Bandits round out the Shenandoah Valley doubleheader Saturday with a $2,000-to-win event at Eastside Speedway in Waynesboro, Va.