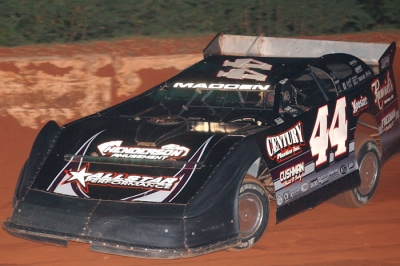 GASTONIA, N.C. (July 12) — Inheriting the lead when race-long leader Jonathan Davenport broke a transmission with 11 laps remaining, Chris Madden of Gray Court, S.C., led the rest of the way Tuesday at Carolina Speedway in the second round of the Schaeffer Oil Southern Nationals.

The two-time champion earned $3,500 for his series-leading 15th career victory as he overcame a rough track surface and moved into the series points lead. | Video | Slideshow

Acknowledging the 4/10-mile oval isn't among his favorite tracks and the conditions weren't optimum, Madden was pleased to come out with the victory.

"(Chassis builder) Scott (Bloomquist) has definitely been working hard and got our program picked up, and man, we were awesome tonight," said the fourth-starting Madden, who quickly moved into second behind Davenport. "We were running Jonathan really hard the whole race, and was very, very good through the whole race."

Dennis "Rambo" Franklin of Gaffney, S.C., finished second with Ross Bailes of Clover, S.C., third in a race where just eight of 23 starters were running at the finish. Outside front-row starter Chip Brindle of Chatsworth, Ga., was fourth and 13th-starting Donald Bradsher of Burlington, N.C., rounded out the top five.

Polesitter Johnny Pursley of Clover, S.C., wasn't around long as he broke in turn four on the first lap and wound up nose-first into the wall. That handed the top spot to Davenport for the next attempted start, and he led 24 laps before slowing entering turn one as Madden swept around. Madden struggled late but was able to hold off Franklin in the 35-lapper.

"Then at the end there, we hooked one of those ruts and folded the nose under on the right-front," Madden said. "We started pushing real bad and that allowed Rambo to catch up to us. But I don't think he'd have even been a threat (otherwise)."

Franklin said he was hampered by a broken right-front shock.

"That's why I really didn't push the issue so much," Franklin said. "I tried to give him a shot that last lap, but I couldn't get off the corner down there. (Madden) was better than I was in (turns) one and two — that's because the shock was broken.

"I'd rather have made some money instead of going down there spin out and try not to wreck him."

Madden, who rallied from the tail to a runner-up finish in Monday's opener at Wythe (Va.) Raceway, was glad to grab the series points lead.

"We came out last night and it looked like we were going to be way behind for the series. Man, we had an awesome race car up there, and came from 24th to second. We had a shot to win that race if we could've gotten a break there at the end. Austin done a great job and won the race.

"We came here, and when we came here tonight, we were looking at kind of a survival deal and not pushing the issue on anything, and take what it gives us. We wound up having a race car to win the race with, so we were very pleased with everything the way it's going so far, to come out with the points lead."

Notes: Madden's Bloomquist Race Car is powered by a Cornett Racing Engine and sponsored by Century Plastics, Cushman Paint & Body and Hamrick's of Gaffney. ... Madden's winning margin was 0.267 seconds. ... Seven drivers finished on the lead lap. ... Jonathan Davenport, the reigning series champ, hopes to get back on track after two subpar performances. "We've had a couple of bad breaks here lately. Some of them are self-induced, and some of 'em are things we can't help," he said. "But like they say, when it rains it pours. But we'll keep going on and see if we can't knock one of these things down, or two." ... Among drivers failing to make the main event: Brian Nuttall Jr., Doug Sanders and Tommy Kerr, who scratched after hot laps. ... The series takes a day off before returning to action Thursday at North Georgia Speedway in Chatsworth, Ga., with a $5,300-to-win feature.