Dillon shrugs off rain for flag-to-flag win at Wythe 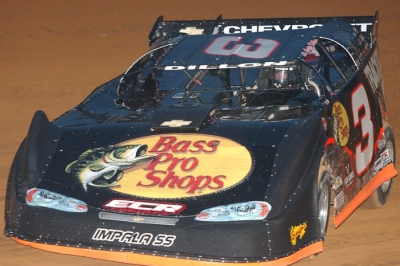 The NASCAR Camping World Truck Series regular from Lewisville, N.C., was slowed by two early cautions, and he also had to wait out a two-hour rain delay that halted the event on the sixth circuit. Track officials twice had to rework and pack the half-mile oval, and the green flag to finish the final 29 circuits of the 35-lapper didn’t wave until well after midnight.

The race-long leader was chased by his brother Ty Dillon for much of the rest of the distance, but a blistered right-rear tire slowed his younger sibling’s threat.

While Austin Dillon continued to lead, 24th-starting Chris Madden of Gray Court, S.C., steadily wheeled his backup machine into the runner-up slot after suffering mechanical problems on his primary car.

Using the high groove, the two-time series champion reached the second spot on lap 29 and cut down the low-running Dillon's lead, but Madden ended up a half-straightaway behind in second.

Dennis Franklin of Gaffney, S.C., was third followed by Ty Dillon and Tim Dohm of Cross Lanes, W.Va., who started 13th in the 24-car field.

Polesitter Jonathan Davenport, who lowered the track record in time trials, ended up ninth. He restarted on the tail after the rain delay along with Chip Brindle and Donald Brasher because the three drivers elected to change tires when the race resumed.

The third-starting Franklin actually took the lead on the race's initial start, which was scrapped because of a five-car pileup exiting turn four that damaged the cars of Eric Jacobsen, Casey Roberts, Travis Greer and Ross Bailes.

Among other cautions was a turn-two spin by Vic Hill shortly after he lost positions to Madden and Dohm.

Notes: Dillon's Warrior Race Car has an Earnhardt-Childress Racing Engine and is sponsored by Bass Pro Shops and Tracker Boats. ... Dark clouds and lightning flashed in the distance of the Virginia countryside early in the evening, and officials cancelled consolation races and set the entire 24-car field by time trials. But it began sprinkling as the cars took the track for the main event and six laps were complete when rain was too heavy to continue. ... The rain stopped and the track was reworked, but just as the cars returned to the track, more wet stuff fell. ... The track was repacked and finally the event resumed after midnight. ... The 24 entries represented eight states. ... Next up on the tour is Tuesday's $3,500-to-win event at Carolina Speedway near Gastonia, N.C.