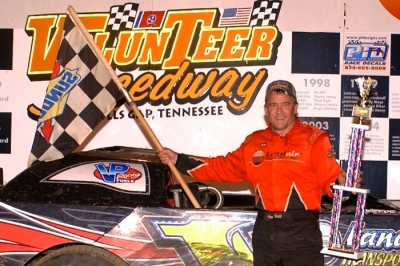 Vic Hill is closing in on 100 career victories at Bulls Gap. (rpmphotos.net)

BULLS GAP, Tenn. (July 9) — If anyone knows the fast-route around the high banks at Volunteer Speedway it’s five-time track champion Vic Hill of Mosheim, Tenn.. Closing in on 100 career feature victories at the track, the 47-year-old racing veteran Hill added one more notch to his belt along with $5,000 to his bank account by winning Saturday's unsanctioned Summer Sizzler Shootout 50. | Video

”This is what it’s all about – winning,” Hill said after topping a 10-car field. “After running another racing chassis brand for the past several years, back over the winter we switched to running Warrior Race Cars for 2011.

"We’ve really had a good car at most all races this season, but just crazy circumstances have either caused us to have problems or drop out of races. Our race results really aren’t indicative of how well we’ve run. So it’s really a good deal here tonight to be able get the victory."

Dillon led the opening lap over Hill followed by Jacobsen, Douglas and Miller. Only 10 laps in, Dillon had powered out to 12-length advantage over Hill and Jacobsen, who were battling for second.

Closing to the back of the running order on lap 15 to begin lapping a trio of cars, Dillon got trapped behind them and Hill and Jacobsen quickly closed in. Racing off the fourth turn on lap 16, Hill pulled the trigger and shot past Dillon to take a lead he would never relinquish.

With the race running clean-and-green, Hill began to separate himself some from Dillon and Jacobsen. As the raced reached halfway, Hill was setting a blistering pace in command out front over Dillon, while Jacobsen and Douglas were battling for third.

With 10 laps remaining, Hill was on cruise control, but a lap-45 caution erased Hill’s advantage over Dillon. But Hill stayed in control the rest of the way for the victory.