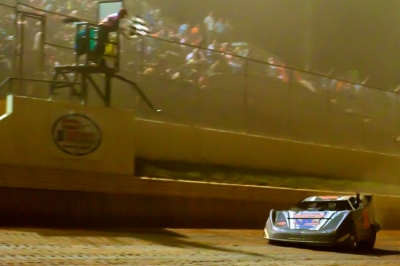 MADISON, N.C. (July 9) — Ricky Weeks, who had nothing but trouble in his first two visits to 311 Motor Speedway this season, got over the hump in Saturday's Carolina Clash Super Late Model Series event. The Rutherfordton, N.C., driver earned $4,000 for his series-leading 33rd career victory on the series. | Slideshow

Dennis Franklin of Gaffney, S.C., finished second to take the points lead from fast qualifier Luke Roffers of Concord, N.C., who finished third at the half-mile oval. Jay Sessoms of Stanley, N.C., and Scott Autry of Fayetteville, N.C., rounded out the top five.

Weeks, who had a scary rollover accident and mechanicial failure in his previous runs at 311 this season, notched his first Carolina Clash victory since a Sept. 18, 2010, triumph at Friendship Motor Speedway in Elkin, N.C.

Autry started outside the front row and led the first two laps before Roffers took command. Weeks reached the front on the 16th lap and led the rest of the 40-lap main event.

Several cautions slowed the action, including a multiple-car wreck in turn two on the 18th lap that knocked Chris Meadows, Dan Breuer and Chad Paxton out of the race. Another accident in the same place later forced Ronnine Hoover and Dustin Mitchell pitside.

Notes: Weeks drives a Rocket Chassis sponsored by Adams Electric, Parton Lumber and Starrette Trucking. ... Weeks, a five-time series champion, has won at least one tour event every season since 2004. ... Luke Roffers entered the race with a one-point leader over reigning series champ Dennis Franklin as the drivers continued a back and forth duel for the title. ... Franklin also took the points lead from Roffers with a victory in the previous series visit to 311. ... Leading series rookie Chad Paxton finished 19th. ... The series takes a break before an Aug. 6 visit to Fayetteville (N.C.) Motor Speedway.