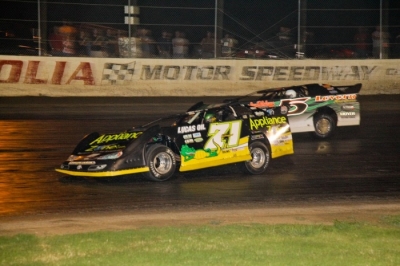 Fast qualifier Jason Brock of Sulligent, Ala., started on the pole, but Byars jumped into the lead from outside the front row with Brock, Rodney Wing, Wall and Neil Baggett in tow.

Byars pulled away again on the restart. Wing briefly slipped to third but got back to second and tracked down Byars, pulling even entering turn three on lap 26. But Wing's car broke loose, and the spin sent him to the tail.

Wall inherited the second spot and turned up the head, taking the lead on the 30th lap and leaving Byars to settled for second the final 11 laps.