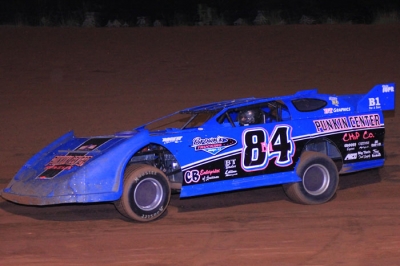 HAUGHTON, La. (July 2) — On a special night for the O'Reilly SUPR family, series points leader Morgan Bagley of Longview, Texas, outlasted Ray Moore of Haughton, La., in a battle of two of the region's hottest drives for a victory at Champion Park Speedway.

Bagley earned $3,000 in the Race to Erase ALS, an event that served as a fund-raiser for the ALS Foundation in honor of 1998 series champion Rusty Cummings of nearby Minden, who was diagnosed with Lou Gehrig's disease in April. | Slideshow | Rusty Cummings story

Bagley's fourth O'Reilly Southern United Professional Racing victory was his first away from USA Speedway in Sterlington, La., as he ended Moore's personal five-race winning streak. Bagley, part of two epic battles over the course of the 40-lap feature, donated $500 of his earnings to the ALS Foundation while celebrating a big victory.

"I always get text messages saying, keep on winning, just try to do it somewhere else," Bagley said. "I didn't put a whole lot of pressure on myself, I know we have a good car, good baseline set-up, good team, good equipment and good sponsors. We just did what we always do, sticking to our program and eventually we was going to get another one somewhere else."

Moore settled for second while Kyle Cummings of Minden, the son of the race's honoree, finished third in the car normally driven by Nicholas Brown. Timothy Culp of West Monroe, La., who jockeyed for the lead early, was fourth while hometown driver Brett Frazier was fifth.

Bagley jumped into the lead at the outset over Moore, Culp, Cummings and B.J. Robinson with Culp taking the second spot two laps after the first caution, then taking the lead from Bagley on the fifth lap.

After a caution for Kevin Sitton's spin, Bagley went to work on Culp in a dazzling side-by-side battle as the drivers exchanged the lead five times over a 13-lap stretch. Moore stayed closed in third while Cummings and Jason Ingalls gave chase.

The frenzied crowd would gasped for air after an exciting laps with another exciting stretch of racing coming up. Moore quickly took second from Culp, then chased down Bagley to take the lead on lap 25. Bagley went back ahead three laps later as the two-car breakaway set up another side-by-side duel.

Bagley finally edged ahead to lead by a full second on lap 37, and ended Moore's winning streak while Culp fell to fourth behind Cummings.

Notes: Bagley's Rocket Chassis race car is powered by a Wall 2 Wall Performance Engine and sponsored by P&W Sales & Oilfield Mfg., Mr. Frank Motorsports, 360 Motorsports, Southern Transport, MSI, J&J Motorsports, Outerwears, Club 29 and Hyperco. ... The 18-minute feature ended at 11:45 pm and was slowed by three cautions. ... Brown's Trucking of Hodge, La., added additional purse money to the pay structure of the feature and boosted the winning amount to $3,000-to-win. Charlie Brown also added an extra $150 hard charger bonus the day of the event, a bonus going to Allen Tippen for his 20th-to-seventh run. ... Jason Ingalls piloted Jerry Mayne's No. 87m. ... Rob Litton of Alexandria, La., drove the No. 77 backup car from Mark Erb Racing because of engine woes in his familiar No. 6x. ... Lee Davis of Greenwood, La., made just his second start of the season, finishing last in the 22-car field. ... Bubba Mullins of West Monroe, La., took a hard ride off the backstretch embankment in his heat race, but he wasn't hurt. ... Drivers failing to make the feature lineup: Jim Bryant, Ricky Ingalls, Paul Joyner, Bubba Mullins, Jim Spurlock and Mark Underwood Jr. ... Kyle Cummings and his family showed their gratitude for the outpouring of support for Rusty Cummings, whose mobility has been limited as the ALS saps his strength. "This goes to show the type people that you are around, this whole racing environment," Kyle said. "Not just the racing environment, because we had so much family that never comes to the races and they pulled together and came tonight. It just goes to show the type people that you are around in this racing deal."