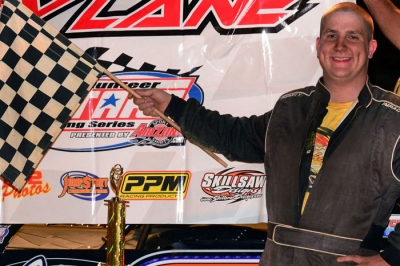 WARTBURG, Tenn. (July 1) — Ross White of Knoxville, Tenn., made the first Super Late Model of his career a big one.

Fast qualifier Eric Jacobsen of Seacliff Beach, Calif., and Chip Brindle of Chatsworth, Ga., were scheduled to start on the front row, but they were shifted back to the second row after two failed starts, and White made the most of the swap.

He set a torrid pace from the outset and kept Jacobsen in check during a race slowed by three caution flags, all in the first 19 laps. One came at just the right time as Jacobsen drew alongside the leader at the quarter-mile oval.

But White officially led all the way, taking the checkers ahead of Jacobsen for a victory in Fourth of July weekend opener.

Anthony Burroughs of Muscle Shoals, Ala., was third while Dustin Linville of Bryantsville, Ky., rallied from his 11th starting spot to finish fourth. Shane Clanton of Fayetteville, Ga., rounded out the top five. Brindle ended up 18th after spinning out of contention.