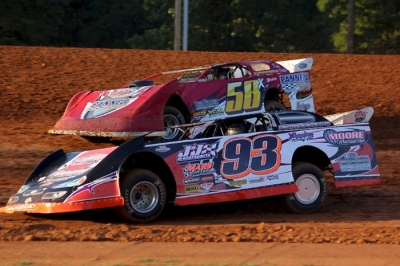 Overall, Moore has seven victories on the season and 11 top-three finishes in his last 16 starts. Saturday's victory came at the site of his richest triumph on Feb. 26 when he earned $10,000 at the Pelican 100.

At the jump of the green flag, Moore led Arkansas visitors Wendell Wallace and Stacy Taylor while Beard was on the move early, grabbing second by the third lap. Further back, Robinson, Morgan Bagley and Curtis Cook battled before a lap-eight caution for debris allowed everyone to catch their breath.

Moore wasted no time on the restart, building his lead back to two seconds after 10 laps as the top five thinned out. Moore began to hit lapped traffic on lap 13 as Beard ran a preferred inside-to-middle line to close the gap. Moore and Beard had four seconds on Wallace, but the field was rebunched when Clay Fisher spun on lap 17.

Moore stayed in control on the restart while Smith pulled up to battle Wallace for third, a side-by-side duel that lasted nine laps.

With 10 laps remaining, the cushion became the favorite way around the track for most of the top five drivers, but Beard was still within striking distance of Moore. The final caution appeared with three laps remaining when the fifth-running Bagley had a flat tire.

Moore's solid late-race restart was enough to hold off Beard the rest of the way.

Notes: Moore's MB2 Customs Chassis is powered by a Jay Dickens Racing Engine and sponsored by Moore Wireline Inc, tic Tools International, X-Treme Graphics, Smith's Towing and J&J Motorsports. ... Moore has four career CCSDS victories. ... Moore started dead last in a seven-car heat and raced to within lengths of catching winner Kyle Beard, earning the pole for the feature. ... The 21-minute main event, slowed by three cautions, ended at 10:24 p.m. ... ArkLaTex hosted its first sanctioned Late Model event in three years. ... Gary Christian of Broken Bow, Okla., dropped off the UMP DIRTcar Summernationals circuit, glad to be racing in more familiar haunts. The 17-year-old blew a motor in his heat race, went to a backup car, took a provisional and dropped out of the feature in 19th. ... Clay Fisher of Dewitt, Ark., brought out his new MasterSbilt by Stuckey race car for just the fifth time. A broken dry sump knocked him out with an 18th-place finish. ... Drivers failing to make the feature lineup: Geoff Aiken, Jay Brunson, Chad Dupont, John Klenzing, Keith Lawson, Eric Neal, Chad Patterson and Jim Spurlock. ... Next up for Comp Cams touring drivers is a July 1-2 doubleheader at West Plains (Mo.) Motor Speedway and a July 3 event at Monett (Mo.) Speedway. The events are co-sanctioned by the MARS DIRTcar Series.