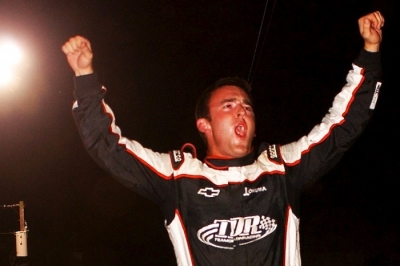 Austin Dillon climbs atop his car to celebrate. (rpmphotos.net)

But the 21-year-old Dillon is a dirt racer at heart, and Saturday night following the conclusion of the first-ever Carolina Clash Super Late Model Series at Volunteer Speedway, he parked in victory lane to the cheers of the big crowd at the 4/10-mile oval.

Vic Hill of Mosheim, Tenn., rallied from the sixth row to finish second, nearly running out of gas in the final laps of the 60-lapper. Clover, S.C., drivers Johnny Pursley and Ross Bailes finished third and fourth followed by 13th-starting Mike Gault of Gaffney, S.C.

Outside front-row starter Chris Ferguson of Mount Holly, N.C., briefly overtook Dillon on an early restart, but Ferguson's flat left-rear tire quickly put Dillon back out front. Jeff Smith of Dallas, N.C., made an outside move for the lead when Dillon got bottled up in slower traffic, but a caution erased the move.

At the outset, Dillon powered into the lead over Ferguson, Mark Douglas, Ricky Weeks and Smith before a lap-three caution for a tangle among Travis Greer, Doug Sanders, Jay Sessoms and Chad Paxton.

Dillon was all alone out front for the Delaware double-file restart with Ferguson and Douglas side-by-side behind him. Up on the wheel and digging hard, Ferguson got around Dillon for the lead on fourth circuit only to slow on lap five with his flat tire.

Back under green, Dillon had Smith and Douglas in tow, while back through the top 10 cars in running order action was two- and three-wide around behind them.

With the leader working traffic at rear of the field on lap 16, Dillon tangled with a lapped car and Smith momentarily made pass for the lead. However, before a new green-flag lap was scored the caution waved when Weeks slowed high in turn four with a flat tire, thus putting Dillon back on the point.

With Dillon leading Smith and Douglas, Ferguson was charging back after his pit stop, breaking into the top 10. But another flat tire halted Ferguson's rally and Douglas also headed to the pits on a lap-23 caution.

With a tacky, hooked-up track and intense racing, survival became an issue was Smith dropped out on lap 30 and then a caution waved on lap 37 when Dennis Franklin slowed with a flat tire. Ferguson called it a night, too.

Dillon was still in command with Scott Autry, Hill, Tim Allen and Pursley battling behind him. Autry's race ended on lap 48, and Allen had a flat tire on lap 53 for the final caution.

Hill, a five-time track champion, restarted right behind Dillon, but his car faltered on the final restart, briefly dropping him to second behind Pursley. Out front, Dillon cruised the rest of the way.

Notes: Dillon's Warrior Race Car has an Earnhardt-Childress Racing Engine and is sponsored by Bass Pro Shops and Tracker Boats. ... Benji Cole withdrew after his car was damaged in hot laps after a tangle with Tim Allen. ... Kennie Compton Jr. crashed hard in time trials, virtually destroying his Bloomquist Race Car. ... Jerry Broyles won Volunteer's Fastrak-sanctioned feature for Crate Late Models. ... Next up for the series is a July 9 event at 311 Motor Speedway.