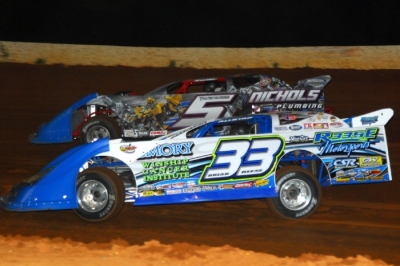 Reese took the lead from outside front-row starter Randy Weaver of Crossville, Tenn., after a lap-five restart and led the rest of the way in front of a jam-packed grandstand at the track hosting its first race in six weeks. | Slideshow

Series points leader William Thomas of Phenix City, Ala., challenged Reese throughout the second half of the race before setting for second while hometown driver David Crabtree was third. Chad Ogle of Sevierville, Tenn., and Mike Hill of Rockwood, Tenn., rounded out the top five at the historic oval with a rich NASCAR history.

Weaver wasn't around at the finish after a lap-27 incident involving the Blount Motorsports teammates of Billy Ogle Jr. and Tommy Kerr. Two laps after a mid-race restart, Weaver and Ogle battled for second down the frontstretch, making contact in turn one that sent Ogle's machine hard into the wall, the car briefly teetering atop the concrete.

As the caution flag appeared, Kerr drove alongside Weaver and in apparent retaliation made contact as the cars entangled on the inside berm. A Blount Motorsports crew member angrily jumped on Weaver's machine, and Weaver climbed out and stood atop his car and engaged in a brief shouting match with Kerr, who also climbed out. Kerr continued in the race, but was eliminated while battling Crabtree amid lapped traffic.

Notes: Reese's Rocket Chassis is sponsored by Emory Winship Cancer Institute, Reese Motorsports and CSR Aluminum Fabrication. ... Reese's qualifying lap was less than a tenth of a second off the track record held by Jimmy Owens. ... Greg Martin led all 25 laps of the night's Crate Late Model feature. ... The Southern All Stars take a break before returning to action July 15-16 with events at Boyd's Speedway in Ringgold, Ga., and Cleveland (Tenn.) Speedway.