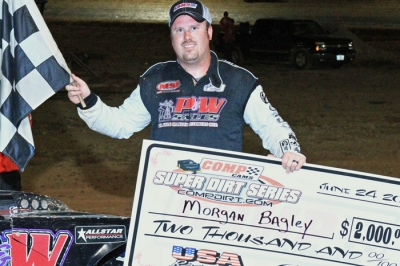 STERLINGTON, La. (June 24) — Morgan Bagley of Longview, Texas, continued his domination at USA Speedway on Friday with a $2,000 victory on the Comp Cams Super Dirt Series tour Friday. Bagley has grabbed all four Late Model victories at the track in a span of three months, his latest a 35-lap victory over Trey Beene of Bossier City, La., by five lengths. | Slideshow

The difference this time for Bagley was being victorious with his open motor car at the quarter-mile facility for the first time. It was also the first time that Bagley has won in the Arkansas-based series, going flag-to-flag in the caution free feature to secure the victory.

The pole-starting Beene settled for second and hard charger Timothy Culp of West Monroe, La., finished third on a feature that saw limited movement throughout the top 10. Veteran Johnny Virden of Russellville, Ark., ended up fourth, but more importantly took over the series points lead from Kyle Beard and now leads Jon Mitchell of Texarkana, Texas, by just four points. Mitchell's fifth-place result was also good enough to push him passed Beard in the standings as well.

The 25-year-old Bagley won the race into turn one at the drop of the green, throwing car in the high groove and leading the field going down the backstretch. Bagley was followed by Beene, Ian Samuels of Trumann, Ark., Culp and Virden.

Fifth-starting Culp dipped by Samuels to take third on the next lap with Bagley checking out to a two-second advantage over Beene just five laps in.

Bagley expanded that margin to a straightaway by lap 10, but was fast approaching the rear of the field. Bagley temporarily opted to trail the back of the pack for three laps, sizing up the best lane to pass in.

At lap 15, Bagley made his move and began battling lapped traffic. As Bagley got into the heaviest group of cars, Beene started cutting into the lead significantly. By lap 20, Beene had narrowed Bagley's lead to five lengths.

For the first time all race long, Bagley started feeling heat from Beene, with second-place right on his decklid. With slower cars in front and slowing the progress of the leaders, Culp pressured Beene for third with five laps to go.

Culp nosed under Beene a few times, but couldn't complete the pass for second while Bagley got a little breathing room out front.

With three laps remaining, the top three were right together, but Bagley maintained his stranglehold at the track in the final laps.