Moore keeps rolling with SUPR victory at I-30 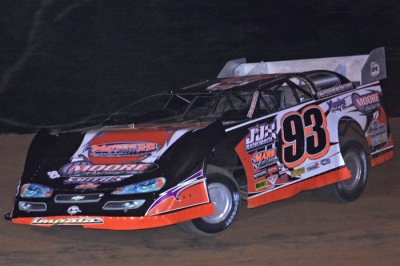 Ray Moore heads for victory at I-30 Speedway. (Best Photography)

LITTLE ROCK, Ark. (June 18) — Ray Moore of Haughton, La., continues to be a force on the O'Reilly Southern United Professional Racing tour, winning his third series race of the season Saturday night at I-30 Speedway. Moore held off a hard-charging Kevin Sitton of Baytown, Texas, late in the race to earn a $2,500 paycheck.

The second-starting Moore had an early back-and-forth battle with current series points leader, Morgan Bagley of Longview, Texas, before getting a late-race scare from Sitton at the stripe of the 40-lapper.

Bagley finished third to expand his points lead by a slim margin over West Monroe, La., driver Timothy Culp, who finished fourth in the race. Brett Frazier of Haughton, La., continued his recent improvement, finishing fifth for his second consecutive top ten with the series.

Moore led the pack on the initial lap over the pole-starting Bagley with Frazier, B.J. Robinson and Culp following close behind. Bagley pulled alongside Moore to challenge for the lead on the next lap, but Moore pulled back ahead before Jon Mitchell of Texarkana, Texas, brought out the race's first caution on the same lap.

Bagley used a great restart to take the point from Moore on lap three. The two leaders resumed their side-by-side war after another restart with Bagley claiming to the low groove, as Moore moved to the cushion and raced by for the lead.

Once securely out front, Moore stretched his advantage to nearly three seconds, as Sitton began his move forward by moving by Culp for the third position.

A restart with 10 laps remaining gave Bagley another shot at the lead. But the suspense was short-lived as Moore quickly powered back into control of the race.

A lap-33 caution for fire under Curt Lipsey's car set up a seven-lap run to the finish, playing into the hands of Sitton, allowing him to work past Bagley and set his sights on Moore.

On the final lap, unbeknownst to Moore, his security for the win was in jeopardy in the last two corners. Sitton's charge had shrunk the Moore’s two-second lead, to a few lengths. Moore's momentum would carry him to the win, but only by mere car lengths over the fast-closing Sitton.

Notes: Moore's MB2 Customs Chassis is powered by a Jay Dickens Racing Engine and sponsored by Moore Wireline Inc, tic Tools International, X-Treme Graphics, Smith's Towing and J&J Motorsports. ... The win was Moore's 17th SUPR Series victory and his third consecutive series top 10 finish at I-30 Speedway, adding to a fifth and 10th last July. Moore has three SUPR wins at I-30 Speedway, dating back to June 2007. ... Eight of Moore's last ten Late Model entries have been top 3 finishes, only missing the starting grid in two Lucas Oil Late Model Dirt Series events at Wheatland (MO) and Kilgore (TX). ... The 26-minute feature ended at 11:04 pm. Four cautions slowed the main event, with nine cars on the lead lap. ... It was SUPR's 56th visit to I-30 Speedway dating back to 1991, with 29 different drivers winning in the series during that span. ... Sitton continues to get comfortable in his new Barry Wright Race Car, scoring four top-six finishes in five events since debuting it earlier this season. ... The seventh-starting Sitton was one of the top 10's biggest movers, advancing five positions to claim the runner-up spot. Sitton draws closer in the O'Reilly SUPR points standing to make it a three-way battle for second place, currently trailing Timothy Culp (by 61) and Allen Tippen (by 36). ... Jeff Chanler claimed the hard charger of the race, going from 19th to seventh. ... Morgan Bagley has over a one-race cushion in the points, increasing his lead from 183 to 198 over second place Timothy Culp. Bagley has managed to pull away from week-to-week, by registering four of five series top 5's in the last month, including a win three weeks ago at USA Speedway in Sterlington, La. ... The Childress Racing Team placed a fifth different driver to take the wheel of the No. F5 car. Modified driver, Chad Dupont of Bossier City, La., handled the duties at I-30 Speedway, impressing early with a heat race victory. Bad luck would strike early in the feature for Dupont as he became the first retiree of the race. ... The series returns to action in two weeks with a tripleheader weeked July 1-3. The tour will visit 171 Speedway in Leesville, La., Champion Park Speedway in Haughton, La., and Lonestar Speedway in Kilgore, Texas.