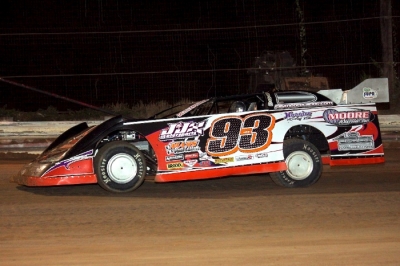 Moore, who has two unsanctioned victories at the quarter-mile racetrack this season, held a straightaway advantage at the finish to pocket $2,500 and record the 16th series victory of his career.

The front-row starting Litton settled for second, while Ronny Adams of Diana, Texas, ended up third. Jody Prince of Sibley, La., finished fourth and Nicholas Brown of Quitman, La., rounded out the top five finishers with an impressive 18th-to-fifth run.

Current series points leader, Morgan Bagley of Longview, Texas, moved up only one spot from his 7th-starting position for a sixth-place finish, but it was good enough to pad his points lead, upping it to 183 over now second-place Allen Tippen of Minden, La.

Notes: Moore's MB2 Customs Chassis is powered by a Jay Dickens Racing Engine and sponsored by Moore Wireline Inc, tic Tools International, X-Treme Graphics, Smith's Towing and J&J Motorsports. ... The victory marked Moore's fifth of 2011 and his second in the SUPR Series -the other coming at Boothill Speedway on May 6th. Moore has entered (18) total events this season with (13) being top ten finishes. ... Six cautions slowed the feature, with fourteen cars running at the finish and twelve on the lead lap. ... ... The race was the 15th time the series has visited the facility, spanning a 20-year period and just four times in the last five seasons. ... Moore is currently third in the FansFund.com contest, an event that raises money for drivers who attends the USA Nationals. Moore trails leader Mike Marlar and 2010 Topless 100 winner, Jared Landers in the voting as of June 13. The fund is set up to help elevate costs for a team participating at the New Richmond, Wisconsin race on August 5th-6th. ... John Mark Mills of West Monroe, La., took a nasty looking spill, head-on into the back straight-away wall, where cars enter onto the speedway. Mills was uninjured. ... Drivers not making the feature included, Paul Joyner, Jesse Mills, Derek Perkins and Brandon Russell. ... The series returns to action June 18 with a $2,500-to-win event at I-30 Speedway in Bryant, Ark.