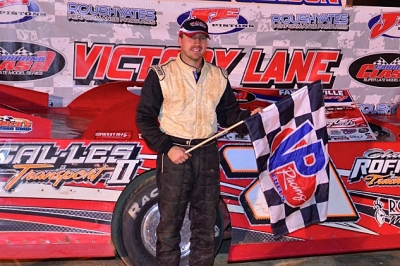 Roffers moved by polesitter Chad Paxton of Troutman, N.C., midway through the 40-lap race and held off Dustin Mitchell of Pine Level N.C., in the closing laps to pick up the $4,000 victory.

"It feels good to run this good at Fayetteville. This has got to be one of the toughest tracks I've ever raced on. This place is different from anyplace else we go," Roffers said. "I kept telling myself not to overdrive the car. when a track gets that slow, everybody's having problems. I could hear (Mitchell), but I couldn't see him."

The rookie Paxton took the lead on the start of the race and held off a strong challenge from hometown driver Craig Shuffield during the early laps. Shuffield began to fade after the 10-lap mark while Roffers began to make his move forward.

After taking second, Roffers used a low-side move in turn three on lap 18 to overtake Paxton for the top spot and quickly pulled to a comfortable advantage. Paxton's top-five run came to a disappointing end when he spun on a lap-27 restart, causing a four-car pileup.

Paxton’s misfortune lifted Mitchell to the second position and he set his sights on the leader. Mitchell caught Roffers on lap 31 and applied heavy pressure in the closing laps. But Roffers held him off to take the victory.

Hometown driver Scott Autry passed seven cars to finish behind Mitchell in the third position while fellow hometown driver Travis Yow finished fourth for the best finish of his career with the series. Shuffield rounded out the top five finishers with his best finish of the season.

Notes: Roffers drives a Rocket Chassis with sponsorship from Wolf-Pack Racing, Cal-Les-2 Transport, Wayne Roffers Trucking, Chad Roffers Trucking, Roffers Wildlife Studio and Wisconsin Lock & Load... With the win, Roffers closed Dennis Franklin’s lead in the series standings to just seven points. Franklin of Gaffney, S.C., finished seventh in the race. ... Mike Gault of Gaffney, S.C., ran as high as third, but fell to sixth in the final laps after suffering a flat tire. ... Paxton’s night got even worse after the spin when he got caught up in a late-race wreck and slammed the backstretch wall. Even with the poor outing, Paxton still leads rookie standings by 81 points over Travis Yow. ... The series returns to action June 25 with a $5,000-to-win event at Volunteer Speedway in Bulls Gap, Tenn.