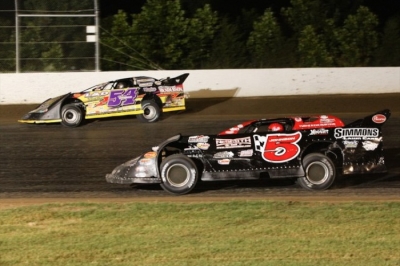 Johnson was up to second by a lap-34 caution, setting up a two-car breakaway over the race's late stages between Johnson and Breazeale, who was running the extreme high line.

"We got some lapped cars a little earlier and I had to experiment in some different lines," Johnson said. "That is the advantage of not being the leader. You can move around and try some of that.

"The racetrack started — just started — to streak up a little bit down in the middle, right below the middle with about three laps to go. I found that and I was able to inch on by him. I found it at the right time and went on to get the win."

Johnson took the checkers three seconds ahead of Breazeale while early leader Jimmy Cliburn of Star, Miss., was third. Klint Byars of Carrollton, Miss., and third-starting Chase Washington of Houlka, Miss., rounded out the top five.

Dane Dacus of Arlington, Tenn., inherited the pole when Jason Cliburn went to a borrowed car, and he led the first lap before Jimmy Cliburn went ahead a few laps later and built a two-second lead by the eighth lap. Breazeale took second from Dacus on the 15th lap and began tracking down the leader.

Near the halfway point, Breazeale caught the leading Cliburn, but a lap-27 caution temporarily put his assault on hold. Johnson was up to third at the yellow with Byars and Dacus holding top-five positions.

On the restart, Breazeale took command and pulled away while Johnson dropped Cliburn to third on lap 32.

But Wendell Wallace slowed on lap 34 to erase Breazeale's lead, and the Breazeale-Johnson breakaway ensued.

Johnson closed in on lap 43 with the frontrunners running side-by-side the next lap, Breazeale just nosing Johnson out at the line. Johnson dipped low and vaulted into the lead with five laps remaining, then stretched his margin the rest of the way.

Notes: Johnson's MasterSbilt Race Car is powered by a GM Performance Parts CT525 crate engine and sponsored by Simmons Lawn Care, Shorty's Motorsports, Team AFCO, Turner Excavating, North Georgia Motorsports and All Star Graphics. ... Seven days earlier, Johnson finished sixth in an Southern All Stars event at Magnolia. ... The green flag dropped for the feature at 10:57 p.m.. ... Two cautions slowed the race. ... Last year's Governor's Cup runner-up Stacy Taylor of Jacksonville, Ark., started 13th and finished sixth. ... Jason Cliburn of Star, Miss., was scheduled to start on the pole with fast time in qualifying, but his 30-lap-old engine had problems, forcing him to borrow Henry Cooper's No. 14 and dropping him to the tail for the feature. He finished 22nd but picked up $250 from Southern Belle for setting fast time. ... Wade Byars of Carrollton, Miss., transferred to the feature through a consolation, but he, too, had engine problems and drove the No. 15s normally driven by Jason Milam; he finished 24th. ... Provisional starter Kyle Beard of Trumann, Ark., finished 14th, good enough to move into the PRO points lead over Eric Cooley of Fulton, Miss. ... Beard and Cooley are the only series drivers to finish 10th or better in all three series events. ... Jeremy Broadus of Biloxi, Miss., scratched early with a broken transmission. ... Besides Broadus, others failing to make the feature lineup: Steve Bryan, Justin Carter, Henry Cooper, Leon Henderson, T.K. King, Clint Logan, Jason Milam, Bradley Price, Kurt Radojcsics, Rick Rickman, Johnny Stokes and Randall Walker. ... Neil Baggett of Shannon, Miss., finished 23rd in the Super Late Model feature after borrowing a carburetor from Jason Brock's team. ... Baggett won Magnolia's Crate Late Model feature. ... The event drew 97 race cars in four divisions. ... The PRO tour moves to Talladega Short Track in Eastaboga, Ala., on Saturday for a $2,000-to-win event.