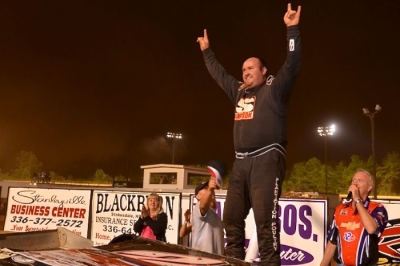 Franklin earned $4,000 and also moved into the series points lead when Luke Roffers of Concord, N.C., spun out of the top five on the final lap. Roffers, a two-time winner this season, entered the event with a 26-point lead.

Randy Weaver of Crossville, Tenn., slipped by polesitter Johnny Pursley of Clover, S.C., on a late restart to get the second spot. Pursley settled for third while Ross Bailes of Clover was fourth and Ronnie Hoover of China Grove, N.C., rounded out the top five. Roffers ended up 17th.

Eighth-starting Chris Ferguson of Mount Holley, N.C., got into the outside fence on the initial start and went to the tail. He retired near the halfway point at the half-mile oval.

The most serious accident came wtih a nine-car pileup in turn four just before a restart. Jay Sessoms was knocked out of the race.