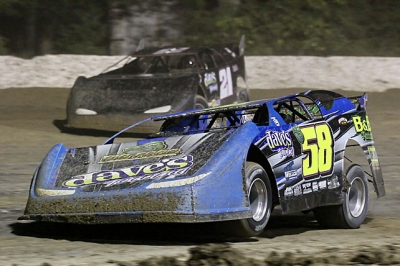 Ivedent Lloyd Jr. (21) uses the high line on his way to victory in the Powell Memorial.(rewingphotos.com)

OCALA, Fla. (June 4) — Less than a month after dominating the $5,000-to-win Mike Peters Open at Bubba Raceway Park only to have a flat-tire drop him to fourth on the final lap, Ivedent Lloyd Jr. earned his redemption at the D-shaped 3/8-mile racetrack Saturday night, and it came in the form of a $10,000 victory in the 16th annual Powell Memorial. | Notebook | Slideshow | Prelims

The hometown driver started ninth in the unsanctioned 67-lap race and overtook frontrunners Jay Johnson of Moultrie, Ga., and Brandon Cameron of Jacksonville, Fla., to move to the lead on lap 17. He later survived a side-by-side battle with Dillon Wood of New Smyrna Beach, Fla., midway through the race and turned back a strong charge from Johnny Collins of Jacksonville, Fla., in the closing laps to score his first victory of the season.

“After we lost that race like that, we came to this race this weekend looking to bounce back,” Lloyd said. “To come back here and be able to lead that many laps and get the race won, it’s more than just redemption. It’s pretty satisfying to get the monkey off our back and win this race.”

After qualifying second and winning his heat race in Friday night’s preliminary action, Lloyd drew the ninth-starting position in a top-10 redraw. But the veteran driver wasted little time getting to the front, driving into the top five by lap 10.

While the front-row starters Johnson and Cameron battled for lead at the 15-lap mark, Lloyd caught the two drivers to make it a three-car battled for the point. Cameron finally moved by Johnson for the position on lap 16, but Lloyd roared by both drivers on the high side on the next lap.

The rim-riding Lloyd flexed his muscle though a long green-flag run, pulling to nearly a straightaway advantage before a spin by David Clegg brought out the race’s first caution on lap 34.

The seventh-starting Wood moved by Cameron for second following the restart and soon began to challenge Lloyd for the lead. Two more cautions within the next 10 laps gave Wood two opportunities to restart alongside Lloyd, who choose the outside for both starts.

Lloyd pulled ahead on a lap-40 restart, but a good jump by Wood on a lap-44 restart allowed him to briefly pull ahead. But Wood wasn’t able to completely clear Lloyd and he pulled back to the point two laps later.

“Dillon got some good starts there,” Lloyd said of his challenger. “I just wanted to stay up top because I knew I could roll the momentum through one and two. Dillon’s a smart kid. I think he could have tried (to slide up), but I think he knew he never really had enough room to do it.”

Wood began to fade as the race entered its later stages, opening the door for 20th-starting Collins to try his hand at overtaking Lloyd.

Collins cleared Wood for the second position on lap 60, but by then Lloyd had built nearly a straightaway lead. Collins made sizable gains each lap, as Lloyd dealt with heavy traffic. But Collins was only able to close within a few car lengths by the finish, as Lloyd held on for the victory.

“After you lead for that long, you start to worry about those guys and who’s coming up through there at the end,” Lloyd said. “I was pretty much just trying to keep the car straight there late in the race, just trying to pick a clear spot and leave room between me and the lapped cars.”

Collins, who struggled during Friday night’s preliminary action, thought things would have been much different if he could have started the race closer to the front.

“I think it would have been a tighter race because the car got better the longer we ran,” Collins said. “We were there at the end, but we just ran out of time. If I wouldn’t have had to start so far back, I think it’s a good possibility that we would of at least had a shot at him, but who knows.”

Jeff Matthews of Dover, Fla., also moved by Wood late in the race to finish third, while Wood held on for the fourth-place finish. Keith Nosbisch of Valrico, Fla., finished fifth after starting 22nd. Cameron faded to seventh by the finish while Johnson fell out midway through the race and ended up 21st.

Notes: Lloyd's Snow Brothers chassis is sponsored by Wells Brothers Farms, Marion Machine and Tool, Dent's Racing Products and Dave’s Towing. ... Thirteen cars finished on the lead lap. ... The race was slowed by four cautions, three of which were caused by single-car spins. The other caution resulted from a three-car wreck that completely blocked the racetrack in turn four. Johnson, Tyler Ivey and Christian Augspurger were involved in the wreck. ... Matthew’s third-place run came after he finished second in an UMP open-wheel modified event earlier in the night at Volusia Speedway Park in Barberville, Fla. He used a helicopter to travel to Ocala in time to run the Late Model feature. ... Professional Wrestling Hall of Fame member Hulk Hogan was the grand marshal of the race and waved the green flag on the initial start. ... The race honors the family of James Powell, a driver who owned Bubba Raceway Park from 1981 until 1994. On June 7, 1995 an airplane crash in Gainesville, Fla., killed Powell’s 4-year-old twin daughters, Ashley and Nicole, his father and mother Buddy and Elizabeth Powell, his aunt Loveda McNair and his uncle C.J. Powell. The race’s 67-lap distance signifies the date of the crash.