Davenport gets $5,000 for victory at Volunteer 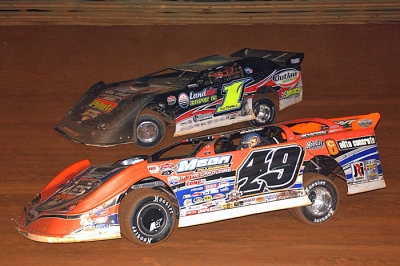 Five-time Volunteer track champion Vic Hill of Mosheim, Tenn., took the early lead from the outside of the front row with the pole-starting Davenport following in the second position. Hill’s time at the front didn’t last very long. He pitted with a flat tire under a lap-two caution, handing the lead to Davenport.

Once out front, Davenport never looked back. His only issue came when the slower cars of Ross White and John Tweed tangled at the exit of turn two directly in front of the leaders.

Davenport and second-running Billy Ogle, Jr. of Knoxville, Tenn., took evasive action to narrowly miss the two halted machines while third-running Eric Jacobsen of Seacliff Beach, Calif., spun into White. Jacobsen was given his position back due to the fact that his spin came after the yellow had been displayed.

Ogle got just close enough to the leader to make it interesting a couple of times throughout the remainder of the event, but Davenport was never seriously challenged. He led to the finish with Ogle settling for second. Jacobsen followed in the third position with Tommy Kerr of Maryville, Tenn., fourth and Mark Vineyard of Powell, Tenn., fifth. Hill finished sixth, the final car on the lead lap.

“I hated to see Vic have trouble. He would have been good to race with,” Davenport said before turning his attention to an upcoming trip to Eldora Speedway in Rossburg, Ohio, for next weekend’s $100,000-to-win Dream XVII. “We had a third in Cleveland, a second last night (at Tazewell) and a win tonight. I think we’re getting our mojo back going into Eldora. I really feel good about going up to Eldora."

Notes: Davenport's Barry Wright Race Car is sponsored by Mega Plumbing, En Compass Solutions, Elite Concrete, Baird Transports, Nicholls Plumbing and JRI Shocks. ... In his most recent visit to Volunteer prior to Saturday, Davenport battled with Chris Madden of Gray Court, S.C., for the lead, but slid into the wall midway through the race. ... The victory is Davenport’s sixth of the season. ... Dale Ball won the night’s Crate Late Model feature. ... The event was part of Volunteer’s special event-only scheduled in 2011. The track’s next scheduled event is a $5,000-to-win Carolina Clash Super Late Model Series event June 25.