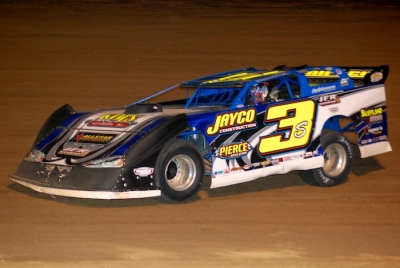 Brian Shirley gets rolling on the final restart. (DirtonDirt.com)

PADUCAH, Ky. (June 3) — During Friday's Northern Allstars Late Model Series race at Paducah International Raceway, wall-hugging Brian Shirley figured Hall of Famer Billy Moyer would be in hot pursuit, and that Will Vaught would likely make a charge on the low side.

His reaction? Don't worry about those guys and take care of business. | Video | Slideshow | Notebook | Sidebar

"I just tried to do my thing and keep an eye out in front of me," said the 30-year-old Chatham, Ill., driver, who led all 40 laps of the Tri-State Challenge special for a season-best $5,000 payday.

Moyer indeed chased Shirley in the high groove, and Vaught nearly got within striking distance just past the midway point, but all the while the leader was focusing on keeping his No. 3s Pierce Race Car cruising in the high groove at the 3/8-mile oval.

"I was never really pushing the issue. I was just on cruise mode," said Shirley, who built a bigger lead after the ninth-starting Vaught got to second on lap 23. "Until one of 'em showed me a nose, I wasn't going to try and go any faster. We had a little left in the tank. We were just out there kind of making steady laps, trying not to hurt the motor any.

"Being a little humid tonight, it was running about 220 (degrees), which isn't horrible, but with the humidity, you don't want to overrun them any more than you've got to."

It was certainly a hot, muggy night at Paducah, which reopened for the first time in two months after heavy spring rains and then a devastating flood shuttered the track. But Shirley was as comfortable as he could be, climbing red-faced and sweaty from his car for a victory lane hug with his lone crew member, Aaron Faugust.

The concrete walls at Paducah have kept many drivers from reaching victory lane, but Shirley was comfortable with how his car felt running a cushion that was just a few feet from the barrier.

"That one time I (bobbled) a little bit, and I just kind of settled back down," Shirley said. "Every once in a while I needed to try and just see how hard I could push it, so if one of those guys came and showed me a nose, I just needed to know how hard I could run it into the corner. I was pretty comfortable out there tonight."

Moyer, of Batesville, Ark. regained second from Vaught shortly after a lap-33 restart, which followed the lone caution of the race for Ryan Unzicker. But he wasn't able to track down Shirley in the closing laps.

"It was pretty one-grooved and top-side dominant here tonight," said Moyer, who won the Tri-State Challenge opener Thursday at Highland (Ill.) Speedway. "I tried moving around a little bit and there just wasn't enough there."

Vaught, of Crane, Mo., went with the softest tire compound on all four corners of his Warrior Race Car. The tires performed well past the halfway point of the race, but after fighting past polesitter Jason Feger of Bloomington, Ill., and dropping Moyer to third, his charge petered out.

"I had to really get up on the wheel and spin the tires a few times to get by those lapped cars there, and sealed the right rear over," said Vaught, who won last year's Tri-State Challenge event at Paducah. "At that time, me and Moyer were racing hard and I got by 'em ... and about three laps later it really sealed over."

Shirley never got a peek at Vaught, he wasn't surprised that he made up ground in the low groove.

"I knew he'd be there. I saw he had soft tires on. ... I just told myself I was going run my own race and try and just stay smooth," Shirley said.

Shirley collected his second victory of the season. His first came in the regular-season opener at Farmer City (Ill.) Raceway.

"It's always nice to get a win with the caliber of cars that are here," Shirley said. "Moyer's one of the best, Feger's really good right now. It's good for everybody on our team, and I've just gotta thank Aaron for helping us out. It's just me and him right now and we're going the best we can."