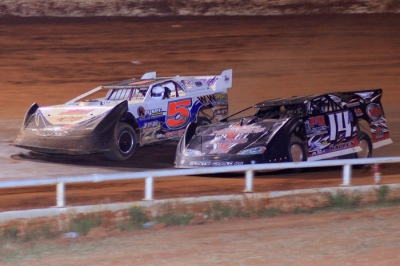 Mitchell took the checkers nearly two seconds ahead of Bagley to earn $2,500 for his fourth series victory in SUPR's first visit to the track since its reconfiguration to a 3/8-mile oval. | Slideshow

While Bagley settled for second, he completed a Memorial Day weekend tripleheader that saw him extend a 15-point lead to 160 points over Timothy Culp of West Monroe, La., whose tough-luck weekend ended with a 14th-place finish.

Mitchell took command from his front-row starting spot, leading a single-file formation. Bagley nosed in on Mitchell on the ninth lap, but Mitchell stayed in control heading toward lapped traffic.

Mitchell edged away from Bagley and was stretching his lead when the final caution flew on lap 25 as tire wear came into play.

Mitchell again built a big lead on the restart and negotiated traffic well enough to keep Bagley's final charge at bay. Bagley's left-rear tire was flat when he stopped on the frontstretch at the race's conclusion.