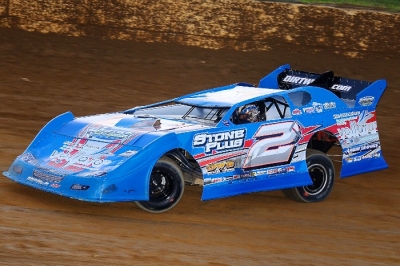 Anthony White tunes up before his Wartburg feature victory. (dt52photos.com)

Polesitter Ross White of Knoxville, Tenn., finished second for his best-ever Late Model performance while Stacy Boles of Clinton was third. Kentuckians Dustin Linville of Bryantsville and Chris Combs of Whitesburg rounded out the top five in a race slowed by several cautions. | Video | Slideshow

The Whites and Boles ran 1-2-3 most of the way while the rest of the positions had hotly contested battles at the quarter-mile oval.

The first of six cautions waved on the eighth lap for a flat for Perry Delaney. Hunter Best, Skylar Marlar, and Brian Hooks were locked in a tight battle for fifth, a battle that ended when Marlar spun on lap 11 in turn two to draw a caution. Several other cars also spun to avoid Marlar.

Linville took advantage, improving from 11th to eighth and gaining another spot from Dan Tipton before another yellow appeared on lap 15.

Linville continued his move forward by eventually taking fifth from Best. A lap later, Linville kept the outside working by taking fourth from Combs. Shortly after that, Best was taken out by Hooks on lap 22. Race director Chris Tilley deemed the move intentional and gave Best his spot back to sixth. Hooks was sent to the rear.

In the closing laps, Anthony White had smooth sailing over Ross White. Linville caught Boles and pressured him for third. The two were side-by-side with three laps to go. But Boles used the momentum of the outside to hold the position.

Notes: The winning DWB Chassis is sponsored by White's Performance, Stone Plus and Vollara. ... Volunteer Racing Series competitors take a break before returning to action June 17-18 at Boyd's Speedway in Ringgold, Ga., and North Georgia Speedway in Chatsworth.