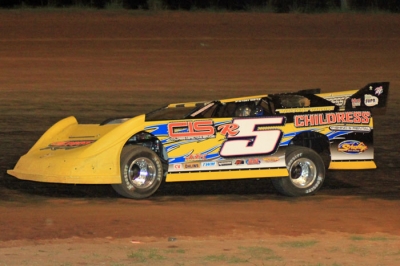 Driving a Raymond Childress-owned car, Robinson edged Kevin Sitton of Baytown, Texas, by three lengths to give the team its first series victory in more than 10 months. The former modified driver earned $2,500 and posted his fourth top-five finish in his last six starts, a stretch that included an unsanctioned victory in Chatham, La. | Slideshow

Behind Sitton, series points leader Morgan Bagley of Longview, Texas, was third while Chris Holley of Dayton, Texas, scored his first top 5 in six weeks, driving a backup car to a fourth-place finish. Jeff Chanler of Minden, La., rounded out the top five as he rallied from his 14th starting spot.

Robinson jumped into the lead over Sitton, Allen Tippen, Troy Berdan and Bagley on the first lap. Trouble struck quickly with a four-car accident between turns one and two involving Kennith Crowe, Wesley Chanler, Odie Green and Rob Litton.

On the restart, Robinson again took charge, but Sitton nosed under him on the third lap. Robinson maintained the point, leading a six-car breakaway.

Sitton went to work on the high groove against Robinson, but it backfired when Tippen slid under him to grab second. As Robinson hit lapped traffic on the 15th lap, Bagley was on the move and up to second a lap later. He was four lengths behind Robinson before the lap-20 spin of Derek Perkins.

On the restart, Robinson led Bagley and Sitton, who fought to regain the second spot, finally making the move stick with two laps remaining.

Sitton was only a few lengths behind Robinson and gaining ground, but the leader held on to win the ninth SUPR race of the season.