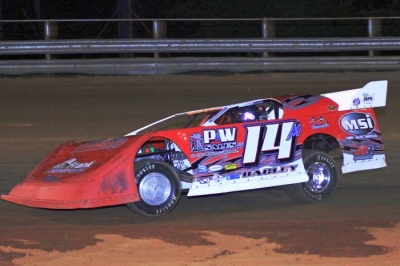 STERLINGTON, La. (May 27) — Morgan Bagley of Longview, Texas, placed his stamp of dominance on USA Speedway on Friday, winning a third consecutive time over a 10-week span at the quarter-mile oval in O'Reilly Southern United Professional Racing competition. | Slideshow

The polesitting Bagley outran B.J. Robinson of Blanchard, La., by seven lengths to a $2,000 victory in stretching his SUPR points lead. Robinson eased under Bagley twice during the 40-lapper, but the Texan led all the way.

"We don't quite understand the success we have been having here. We come here and try to be well prepared, just like everywhere else," Bagley said. "The last couple of times here, we started on the outside of the front row of the heat race, which helped us out a lot and gave us a decent starting position in the feature. Tonight we pulled in and had to start last in the heat and our team thought then, that it could be the end of our streak.

"We dug in, held our heads up and worked hard and got some good passing points that put us on the pole. From then on, we had a good enough car to stay up front and lead every lap — it worked out pretty good for us.

Bagley got the jump on Robinson, Sitton, Rob Litton and Chanler at the outset and reached lapped traffic by the 10th lap.

A lap-14 for a slowing Ronny Adams brought out the first yellow, and Robinson kept Bagley within a few lengths through the halfway point.

As Bagley approached the slower Troy Berdan, Robinson closed to the decklid of Bagley. Both drivers negotiated traffic well, with Robinson not letting Bagley get out of his grasp at lap 30.

Litton lost a top-five finish when he slowed with suspension problems to bring out the final caution on lap 32, and Bagley edged away to lead but a full second by lap 37 as most drivers stuck with the low groove on the rubbered-up track.

Robinson eased closer to Bagley in the final laps, but never got within striking distance.