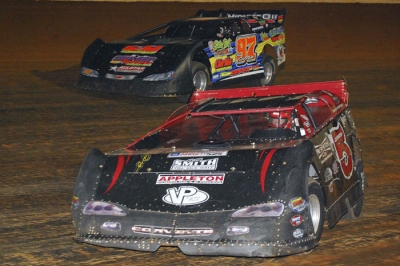 RINGGOLD, Ga. (May 27) — Ronnie Johnson of nearby Chattanooga, Tenn., took the lead from Skip Arp of Georgetown, Tenn., on the 15th lap Friday and raced to his third special event victory of the season at Boyd's Speedway. Johnson earned $3,000 for his eighth career victory on the Southern Regional Racing Series. | Slideshow

Arp started outside the front row and took the lead at the outset while the third-starting Johnson moved into second on the 10th lap, then began tracking the leader.

Johnson then took over before the halfway point and kept a comfortable lead through a series of cautions for his third SRRS victory of the season. He also won at Boyd's on the series on April 8.

Arp settled for second while Tim Busha of Boaz, Ala., advanced three spots to finish third. Stacy Holmes of Munford, Ala., and polesitter Brandon Kinzer of Allen, Ky., rounded out the top five.