Winning duel, Davenport gets $5,000 at Cleveland 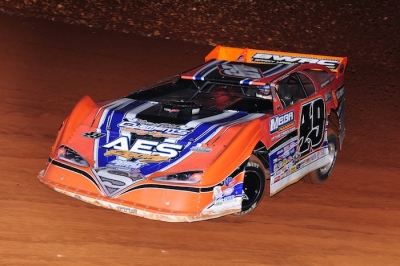 Davenport, who started on the pole for the 50-lapper, earned $5,000 for his sixth career victory on the Southern All Star Dirt Racing Series. | Slideshow

Just eight of 24 starters were running at the finish in a race where Madden tangled with Chris Ferguson of Mount Holly, N.C., in the final laps, knocking both drivers out of the race while they battled for second.

David Payne of Murphy, N.C., moved up to finish in the second spot followed by William Thomas of Phenix City, Ala. Chad Ogle of Sevierville, Tenn., and Stacy Boles of Clinton, Tenn., rounded out the top five at the third-mile oval in a race slowed by 11 cautions.

Davenport took command at the outset while front-row starter Ray Cook, Derek Ellis and Riley Hickman were among drivers who dropped out before the halfway point.

Ivedent Lloyd Jr. of Ocala, Fla., pressured Davenport in the first half of the race as the top two drivers pulled away from the field during short green-flag runs between caution flags.

On the 23rd lap, Madden took second from Lloyd and moved up for a familiar Davenport-Madden battle with the drivers whose race shops are both near Gaffney, S.C.

After a lap-33 restart, Madden made an outside move to take the lead, only to have Davenport answer the move with his own outside pass a lap later.

The lead-swapping affair continued when Madden went back ahead on lap 39, but Davenport surged back into the lead two laps later amid wild action that at one point saw Madden spin completely in turns one and two but continue without losing a spot.

A restart on lap-46 set up a four-lap dash to the finish, and Ferguson, who spun 10 laps earlier but rallied back to third, was suddenly in the mix. But when Ferguson tried an outside move on Madden, the two tangled, resulting in enough damage to knock both drivers out of the race.

With his nemesis eliminated, Davenport sailed the final few laps to the victory.

Notes: Davenport's Barry Wright Race Car is sponsored by Mega Plumbing, En Compass Solutions, Elite Concrete, Baird Transports, Nicholls Plumbing and JRI Shocks. ... Davenport's previous Southern All Star victory came in last year's season finale on Nov. 20 at Cleveland. ... Rough track conditions prolonged the racing program, and equipment was brought onto the surface after qualifying to smooth things out. ... Shane Clanton, winner of the season's first Southern All Star event at Cleveland, tagged the wall in qualifying and loaded up. ... Skip Arp also scratched after qualifying. ... The Southern All Stars have a Memorial Day weekend doubleheader in Mississippi with $5,000-to-win events at Whynot Motorsports Park (May 28) and Magnolia Motor Speedway (May 29) in Columbus.