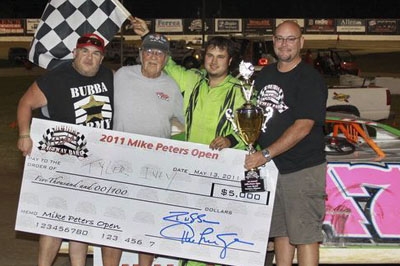 The second-starting Lloyd dominated the majority of the race on an extremely rough racetrack that caused race officials to cut the main event to 30 laps from the scheduled 50. Lloyd led 29 laps and appeared to be headed to victory after taking the white flag until the lapped car of Jim Dyer spun in turn one. | Notebook | Slideshow

With Dyer sitting in the middle of the racing groove and the majority of the field yet to pass him, race officials displayed the caution, setting up a one-lap dash to the finish.

The second-running Ivey had failed on earlier attempts to pass the quicker Lloyd, but the task was made much easier when Lloyd made contact with a lapped car under the caution, flattening his left-rear tire.

Rather than pit for a new tire, Lloyd decided to stay out and attempt to finish the race on the flat. He led the field to the green for the restart, but was no match for Ivey, as he drove by in turn one and cruised to the victory while Lloyd fell to fourth in limping to the finish.

“I hate it for Ivedent. I would hate to be in his position, but I led the (lap) that pays the money,” said Ivey, who claimed the victory in front of a near capacity crowd that turned out for the first event at the 3/8-mile racetrack since nationally syndicated radio personality Bubba the Love Sponge purchased the facility in April and changed the track’s name from Ocala Speedway.

“It’s definitely one of the bigger paydays I’ve had,” Ivey added. “It’s really cool to do it in front of all these people.”

While Ivey celebrated his victory, a disappointed and frustrated Lloyd questioned the use of the caution after he had already taken the white flag.

“It was a pretty sick feeling when I knew my tire was flat,” Lloyd said. “I think that’s $5,000 down to $500 or something like that. It was just one of them deals. It looked like the car in front of him was stopping and he pulled out and I was there. But I can’t figure out why the race wasn’t over. I thought when the caution came out there we should have been racing back to the finish, but I guess it doesn’t work that way for some reason.”

Nosbisch, who started seventh and moved up to third early in the race, was happy just to survive and score the runner-up finish after suffering front-end suspension damage in a pileup on the first attempt to start the race when polesitter Phillip Cobb of Apollo Beach, Fla., got loose in front of the field in turn one.

“It was a pretty good finish I guess with everything we dealt with,” Nosbisch said. “That wreck on the first lap bent the toe-in on the car and we couldn’t steer the way we needed to. I think if that wouldn’t have happened we would’ve had a stronger finish. The track was rough and that made it even worse, but that’s one of them things you have to go through.”

The rough conditions were difficult for most all of the competitors to navigate during the race. Even the race winner had trouble with the rough spots, nearly spinning out on multiple occasions.

“It was so rough (in the corners) that I almost spun it out a couple times,” Ivey said of the track conditions. “It’s just tough racing on a track like that. One end is slick and you gotta baby it around there. The other end, you’re wide open trying to go through the holes. But it all worked out for the best I guess.”

Notes: Ivey's Rocket Chassis is sponsored by Crowder Trucking. ... The next Late Model special event at Bubba Raceway Park will be the Powell Memorial, a $10,000-to-win event scheduled for June 3-4. ... Defending track champion Mark Whitener of Middleburg, Fla., was attempting to take the second position in a heat race, but got into the wall, ending his night early. ... Jack Nosbisch of Riverview, Fla., won the fourth heat race, but he had mechanical problems before the feature and was a scratch.