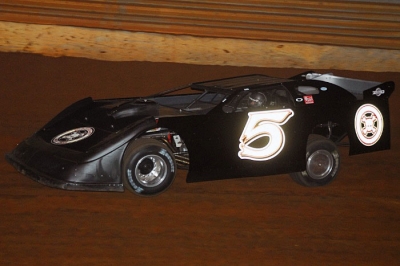 Eric Jacobsen races to a $3,000 victory in STARS VRS action at Tazwell. (mrmracing.net)

TAZWELL, Tenn. (May 7) – Eric Jacobsen of Seacliff Beach, Calif., survived an attrition-field raced Saturday night at Tazewell Speedway to score the first STARS Volunteer Racing Series victory of his career. He earned $3,000 in the event that was shortened from 40 to 37 laps because of rain. | Slideshow

The polesitting Jacobsen moved to the lead on the first attempt to start the race while a pileup behind him collected all but 5 of the race’s 15 starters, including second-starting Jason Trammel of Lake City, Tenn., and third-starting Steve Casebolt of Richmond, Ind.

After the incident, race officials decided to send the field back to the pit area to allow drivers involved in the pileup to make repairs. Of those involved, Trammel, Casebolt and defending series champion Mike Weeks of Friendsville, Tenn., were unable to repair their race cars.

Once the feature finally got underway, Jacobsen quickly showed his strength. He pulled to a comfortable advantage over Mosheim, Tenn., driver Vic Hill, who injured his wrist in the first-lap pileup and completed the race with his arm tightly wrapped with duct tape.