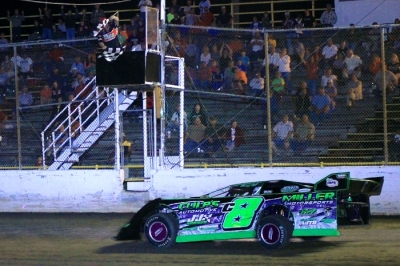 GREENVILLE, Miss. (May 7) — On the cusp of grabbing his first Late Model victory in recent weeks, Timothy Culp of West Monroe, La., crossed the threshold Saturday at Greenville Speedway. The 20-year-old upstart chalked up a memorable, first-ever victory with a 50-lap victory worth $2,500 that tightened up the O'Reilly Southern United Professional Racing series point standings. | Slideshow

The fourth-starting Culp edged Ray Moore of Haughton, La., by just more than one length and had plenty of anxious moments throughout an action-packed feature.

Moore charged through the field after bringing out a caution flag just before the race's midpoint, rallying to challenge the leader. Culp faltered a few times in the late stages but held on for the victory with polesitter Rob Litton, Mike Palasini and Kevin Sitton all playing major roles.

Behind Culp and Moore, Allen Tippen of Minden, La., claimed a solid third-place finish, while Litton, of Alexandria, La., was fourth. Palasini, a Greenville regular of Leland, Miss., rounded out the top five.

With two tries required to get the race started, Litton took the lead at the outset and was building a lead when B.J. Robinson slipped over the turn-three embankment to draw a lap-five caution. Bagley headed for the pits to change a flat tire, returning just in time for the restart.

After a pair of lap-nine cautions — one for a four-car incident in turn two involving Bo Gordon, Clay Fisher, Edmond Jenkins and Chad Washington — Litton stretched to a three-second advantage before hitting slower traffic on lap 19.

Gordon spun to draw another yellow, and just after the restart the fifth-running Moore spun in turn three for an uncharacteristic mistake that put him back to 15th.

Culp took second from Palasini on lap 21, and began cutting into Litton's advantage as Sitton moved into third by lap 31. But Sitton's run ended when a J-bar broke on his machine.

With Culp in control, Moore turned up in the heat, taking fourth from Tippen on the restart, stealing third from Palasini two laps later and then taking second from Litton with five laps remaining.

Culp's two second cushion was whittled away to a three-length lead with three laps remaining, as Moore started applying pressure. With tension mounting among the now-standing crowd, Culp bobbled in a couple corners as Moore approached.

Culp gathered himself on the high side and his his marks the rest of the way while the low-running Moore's challenge fell short at the checkered flags.

Notes: Culp's Trak-Star Race Car is powered by a Wall 2 Wall Performance Engine and sponsored by Miller Motorsports, Culp's Automotive, BA Motorsports, Graduate Sales, Ricky Culp's Auto, Beau Taylor Technologies and J&J Motorsports. ... Culp finished sixth last September in his only other series start at Greenville Speedway. .... The checkered flag fell on the 43-minute feature at 10:40 p.m.; the race was slowed by nine cautions. ... Robbie Stuart of DeRidder, La., was the hard charger with a 16th-to-sixth run. ... Allen Tippen continued his trail of consistency with his 10th-to-third place run. Tippen has top-five finishes in five of the seven SUPR events this season. ... Eric Young of Warren, Ark., rolled his No. 51 in the third heat as the car came to rest near the top of the turn-four embankment. He wasn't hurt but retired for the night. ... SUPR competitors return to action May 21 at Pike County Speedway in Magnolia, Miss.