Moore races to victory in SUPR return to Boothill 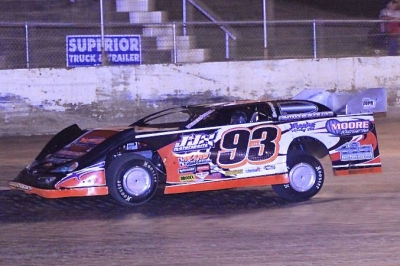 GREENWOOD, La. (May 6) – Front-row starter Ray Moore of Shreveport, La., cruised to a $2,000 victory in the O'Reilly Auto Parts Southern United Professional Racing event Friday night at Boothill Speedway. Moore led the 40-lap race flag-to-flag for the victory, in the first visit by the series to Boothill in nearly three years. | Slideshow

Moore, the 2007 series champion, raced to more than a three-second advantage over B.J. Robinson of Blanchard, La., at the finish for the 15th SUPR victory of his career.

Robinson got two shots at Moore on a pair of restarts near the race’s halfway mark, but Moore countered with flawless performance in holding off all-comers throughout the race.

"We could go high or low, go in high and shoot down to the bottom, really just do whatever we wanted to and lapped traffic never played an issued in it," he said. "I was just glad that the track stayed smooth and slick from the word go.

At the outset, Moore took commandï¿½ with Robinson, Brett Frazier, Litton and Jason Ingalls giving chase. Moore stretched the lead to two seconds after five laps while Robinson had his hands full with Frazier.

Moore doubled his advantage over his pursuers and entered lapped traffic on the ninth lap, quickly gaining a three-car cushion over second place, and by the halfway point he had a whopping seven-second margin.

Moore's huge advantage was erased when Wendall Bolden slowed on the backstretch on lap 23, and the final yellow appeared a lap later.

Moore was in sight of Robinson on the restart, but not for long as the leader quickly pulled out to a full straightaway and cruised to victory.

Notes: Moore's MB2 Customs Chassis is powered by a Jay Dickens Racing Engine and sponsored by Moore Wireline Inc, tic Tools International, X-Treme Graphics, Smith's Towing and J&J Motorsports. ... Moore's 15 career SUPR victories rank him ninth on the all-time list. ... The green flag dropped at 11 p.m. on the feature, which was slowed by two cautions and ended with 12 cars on the lead lap. ... Jason Ingalls of Longview, Texas, made a return to Late Model racing, driving the No. 87M owned by Jody Mayne. The sixth-starting Ingalls battled among the top five early and finished a respectable seventh. ... Jody Prince of Sibley, La., filled in for the injured Josh Danzy in consecutive weeks, in the Raymond Childress-owned No. F5 car. He finished 13th, the first car one lap down. Danzy, who is recovering from a back injury, is expected to be back in the car in a few weeks. ... Chris Holley of Dayton, Texas, broke a motor in hot laps, ending his night early. ... Besides Holley, drivers failing to make the feature: Zach McMillan, Eric Neal, Brandon Russell and Jim Spurlock. ... Spurlock, of Arcadia, La., was back in the seat of a Dirt Late Model for the first time in a few years but encountered a fuel pickup problem in hot laps that hampered his night. ... Russell, of Keithville, La., was the third different driver to pilot the Gilbert Swayne-owned car this season. A bad piston in hot laps knocked Russell from the night's events. ... The series completes its weekend doubleheader at Greenville (Miss.) Speedway Saturday night. Moore swept the 2010 SUPR events at Greenville.