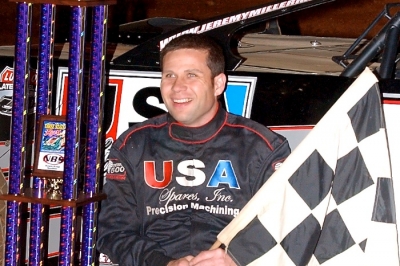 Miller started on the front row with polesitter and brother-in-law D.J. Myers of Greencastle, Pa., who led the first 15 laps. But Miller used the outside groove to snag the lead from Myers and pulled away after the 30-lap race's fourth and final caution on lap 19. | Slideshow

Two-time and reigning series champion Jason Covert of York Haven, Pa., rallied from his 16th starting spot to finish second, but didn't have enough time to catch Miller at the 3/8-mile oval.

Myers settled for third ahead of Ronnie DeHaven Jr. of Winchester, Va., and Devin Friese of Chambersburg, Pa., who ran as high as third.

The race's final caution appeared when a slower car spun in front of Miller, who went high in turns three and four to avoid contact. It wasn't quite as scary for him as it might've looked, Miller said.

"Being the leader in these races is tough because you're out front and you have everything to lose, and it was one of those situations where I didn't want to run second," Miller said. "Sometimes you just have to go for it."

Myers wasn't too disappointed after leading half the race.

"(Miller) was good tonight, no doubt. It ain't as bad when a guy passes you on the outside and then drives away from you," he said. "It'd be a lot worse if he'd done that, and then stayed right there a car length in front of me. He pulled away pretty good, so I know he was running really well. When you're that good, you deserve to win it."

Notes: Miller's MasterSbilt Race Car is sponsored by USA Spares Precision Machining, Miller Fabrication and Schaeffer Racing Oil. ... The victory is Miller's second overall of the season; he captured Hagerstown (Md.) Speedway's season opener on April 2. ... Nineteen of 24 starters were running at the finish. ... The Three State Flyers tour takes a break before returning to action Memorial Day weekend with May 27-28 events at Winchester (Va.) Speedway and Hagerstown (Md.) Speedway.