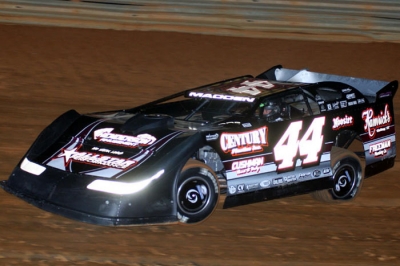 Madden and Davenport shared the front row for the start of the 50-lap race, with Madden pulling ahead in turn one. Third-starting Mike Marlar of Winfield, Tenn., pulled to second while Davenport slid back to third. Davenport moved around Marlar for second on lap eight and set his sights on Madden. | Slideshow

Davenport briefly grabbed the lead from Madden as the two drivers raced through traffic on lap 26, but Madden regained the spot four laps later. Davenport's race ended when he slipped high and got into the turn-two wall on a lap-35 restart.

Madden cruised the rest of the way in the unsanctioned event at the 4/10-mile oval.

“We had a really great race car tonight, this place was really hooked up and fast,” said Madden, who added the victory to March's Spring Thaw triumph at Volunteer. “These Bloomquist Race Cars are really good here. Scott’s (Bloomquist) got a lot of laps around Volunteer Speedway and he’s really helped us with set-up advice. Jonathan (Davenport) and I really had a good battle going on, it was a heckuva race and I want to thank him for racing me clean. He and I really put on a good show for the fans.”

Madden jumped out to the lead in the 50-lapper with Davenport and Mike Marlar of Winfield, Tenn., in pursuit. The frontrunners tightened entering lapped traffic at lap 14 with Davenport frequently pressured Madden.

Davenport shot past to lead a few laps past the halfway point, but Madden worked back under him to go back ahead before a lap-35 caution for Marlar, who broke J-bar and driveshaft that forced his retirement.

On the double-file restart, Davenport started alongside Blankenship behind Madden and slipped high, making contact with the concrete to lose several positions. He slowed and parked for the night.

Blankenship ran second the rest of the way but couldn't keep up with Madden.

"The car was really good," Blankenship said. "It's just hard to get around Madden at this place because he's so good here."

Notes: Madden's Cornett-powered Bloomquist Race Car is sponsored by Century Plastics, Cushman Paint & Body, Freeman Plumbing and Hamrick's of Gaffney. ... Madden can earn a $1,500 bonus with a victory at Wythe. ... Jimmy Owens had won his previous two visits to Volunteer, but couldn't overcome a mid-pack starting spot. He finished seventh. ... Randy Weaver of Crossville, Tenn., piloted a No. 5 car for South Carolina-based Nichols Racing, a Barry Wright-designed machine. He won the consolation race.