Pursley leads all 40 laps for victory at Lancaster 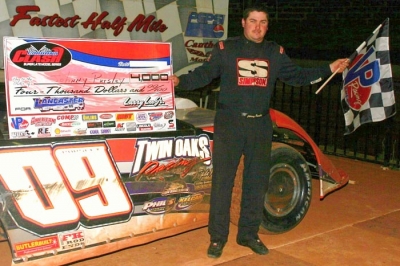 Johnny Pursley picks up the checkers at Lancaster. (Johnny Sims)

“I love racing at Lancaster,” said the 27-year-old Pursley, whose last series victory came nearly one year earlier. “My dad has won a lot of races here and now we have won a few too. The track is fast and smooth and I just have always felt comfortable racing here. This win tonight just reminds me of how much I love this place.”

Pursley was challenged only on restarts after eight cautions at the half-mile oval, and he edged away over the final 10 laps to take the checkers in front of a big crowd over Dennis “Rambo” Franklin of Gaffney, S.C., and Jeff Smith of Dallas, N.C. Petey Ivey of Union, S.C., advanced seven positions to finish fourth and Kennie Compton Jr. of Bland, Va., rounded out the top five. Ray Tucker of Greensboro, N.C., started on the pole and ran in the top five before dropping out midway through the race, and Benji Cole of Canon, Ga., fell out running second on the 30th lap.

“Those guys were rolling up beside me on the starts a little, but we had the momentum on the top,” Pursley said. “Rambo and Ray both drove inside me a couple of times. But this Twin Oaks Racing Rocket was great and we were able to drive away from them.”

The most serious accident came at the outset of the 40-lapper with a five-car pileup at the flagstand involving Scott Autry, Travis Yow, Chad Paxton, Jimmy McCormick and David Taylor.

Luke Roffers of Concord, N.C., held onto the series points lead despite mechanical woes that forced him off the track before the green flag, giving him a 24th-place finish.