Putnam gets redemption at North Alabama 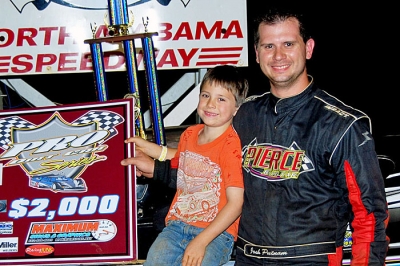 “We don’t run a lot of events with this tire rule, so we were worried we had gone the wrong way on tires, but as the event progressed the car just kept getting better,” Putnam said in victory lane. “It feels so good to make up for my mistake last night.”

Putnam of of Killen, Ala., started from the pole in the 40-lap race with Rick Rickman of Columbus, Miss., joining him on the front row. Putnam jumped to the lead on the start of the race with Kyle Beard and Ronny Lee Hollingsworth close behind.

Putnam quickly pulled to a straightaway advantage before the race’s first caution appeared on lap eight when Mark Dodson made hard contact with the frontstretch wall. Putnam once again drove away from the field on the ensuing restart as Beard and Hollingsworth began to battle for second.

Hollingsworth claimed second for good on lap 11 and set his sights on the leader. But Putnam maintained the lead through two late restarts and cruised to the second PRO victory of his career.

Notes: Putnam’s Pierce Race Car is powered by a Burns Racing Engine with sponsorship from B&M Salvage, Nolan England Auto Parts, Wesley Threet Excavating, and Wise Metals Group. ... Brian Rickman of Columbus, Miss., received the hard luck award after mechanical woes prior to the start of the feature cause him to relinquishing his third-starting position and scratch from the program. ... Friday night's winner Anthony Burroughs finished 10th. ... The PRO Dirt Car Series will take the month of May off before returning to action June 4 at Magnonlia Motor Speedway in Columbus, Miss.