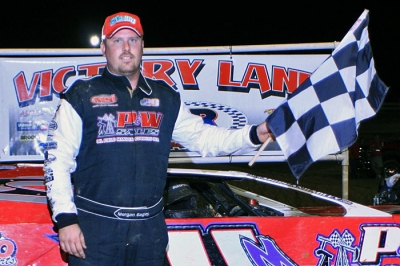 It initially appeared SUPR would have its fifth different winner of 2011, but Bagley passed Timothy Culp of West Monroe, La., at the halfway mark of the 40-lapper to win by a two-and-a-half second margin. | Slideshow

The second-place finish was also Culp's second in-a-row at the quarter-mile oval in northeast Louisiana. Culp nursed a leaking tire that was losing pressure the last few laps and barely held on over a charging Kevin Sitton of Baytown, Texas. Robbie Stuart of DeRidder, La., and Allen Tippen of Minden, rounded out the top five.

At the outset, the 20-car field bunched up in turn one with Allen Murray of San Antonio, Texas, and Wesley Chanler of Minden, La. making contact to bring out an immediate caution. Murray's machine was briefly airborne and both drivers retired.

Culp took the early lead over Sitton, Bagley, Tippen and Stuart but his pursuers kept him in check over the first 10 laps. At lap 14, a three-wide frontstretch race for the lead ensued with Culp barely holding on.

Bagley grabbed the second spot from Sitton two laps later and turned his focus to Culp. Bagley shot into the lead midway through the race while Culp and Sitton battled behind him.

A turn-four spin by Robbie Starnes of Baytown, Texas, brought out the second yellow on lap 24, and it took two tries to get going again after Troy Berdan's spin on the restart.

Bagley seized control on the restart, stretching his lead over Culp and Sitton. Sitton pressured Culp for second while Bagley motored away through lapped cars with five laps remaining.

Bagley flawlessly cleared the congestion on lap 38, bagging another victory at the track where he won his first Late Model event in March. Culp survived his deflating tire to edge the fast-approaching Sitton by almost one length.

Notes: Bagley's Rocket Chassis is powered by Wall 2 Wall Performance Engines and sponsored by P&W Sales & Oilfield Mfg., MSI Pumps, Valves & Manifolds, Mr. Frank Motorsports, 360 Motorsports, Club 29, Southern Transport, J&J Motorsports, Hyperco and Outerwears. ... Bagley slightly increased his series points lead over Timothy Culp by five more points, going from 63 to 68. ... Robbie Stuart shook up the points by climbing six positions from 14th to eighth. ... The checkered flag flew on the 20-minute feature at 11:15 p.m.; the race was slowed by three cautions and 13 drivers finished on the lead lap. ... Ronny Adams of Diana, Texas, suffered a bent left-front spindle while racing hard with Timothy Culp in a heat race. Adams finished a distant second to Culp in the heat and finished eighth in the main event. ... Jody Prince of Sibley, La., temporarily replaced Josh Danzy, in the Raymond Childress-owned No. F5 car; Danzy injured his back moving into a new home. ... Keith Strother of Oakdale, La., returned to the seat of a Dirt Late Model for the first time in almost six years. Strother's return would be short-lived though, as his car experienced mechanical failures from the very beginning, causing him to miss both, heat and consolation races. ... Darin Patrick of West Monroe, La., debuted his pink and black No. 21, but was hampered by a fuel pressure problems. ... Other drivers not making the feature: Jay Brunson, Brett Frazier, Paul Joyner and Derek Perkins. ... SUPR competitors return to action May 6-7 at Boothill Speedway in Greenwood, La., and Greenville (Miss.) Speedway. It will mark SUPR's first visit to Boothill since 2008 and first since the track was reconfigured to a short quarter-mile.